1 May 2017by Wouter MunnichsNo CommentsBrands, Jeans The Grivec Brothers Marcel and Roger Grivec launched last year their first denim collection. The core of the Grivec Bros. collection are two jeans fits. The first fit is ‘Cool Pete’, their regular tapered cut, and the second fit is ‘Hower’, a classic high rise jeans with a great silhouette with a slim tapered cut. Both jeans are made of 14oz Japanese selvedge denim quality from the Kaihara mill. The jeans are made in Portugal. After the successful launch the twins brothers are working hard to expand their Grivec Bros. denim collection. They just released their latest style in the collection with the new ‘Bricker’ fit. The ‘Bricker’ fit is a more comfort fit which is a little bit wider on the upper legs. It has bigger front and back pockets for more comfort too. Just like the other two fits this jean is also made of 14oz Japanese selvage Kaihara fabric. It features the same unique details as the Grivec top button, the classic 13 stars buttons, selvage fly, one-line triangle backpocket arcuate stitching, etc. The new ‘Bricker’ fit comes also with the miner towel as packaging. Below some shots of the latest Grivec Bros. family member  the ‘Bricker’ jeans. For their button fly they use four classic ’13 star’ buttons, which have their origin in U.S. naval uniforms but were also used in 1940’s American mail-order jeans because of short supply of materials during WWII. They made their ’13 stars’ from red brass in a tribute to the lesser known jeans classics. Each jean is wrapped in a miners towel. These towels were used back in the days by miners to keep their laundry separated. 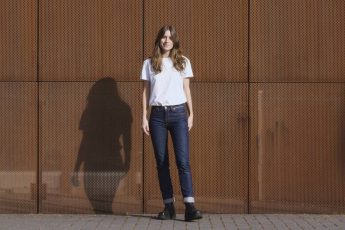