Ian Berry joined double Oscar Winner Jenny Beavan in a denim jacket collaboration for Pin Your Thanks during the first lockdown to mark all the different workers out there helping us. This is a spin-off of Ian Berry’s ‘I Cap For’ initiative. Patches And Pins From Care Workers

Ian and Jenny, an Academy Award Winning Costume Designer, pinned a Blackhorse Lane Ateliers denim jacket so it got covered all-over with Pin Your Thanks patches and pins that Ian and his son Elliott collected. All the different patches and pins are from care workers that helped during Covid-19.

Pin Your Thanks was born out of an idea after a founding member of a Covid-19 volunteering group in SE London, wanted to find a way to thank volunteers who had gone beyond the call of duty in helping others (more about it here). Ian Berry with his son Elliott.

To make the denim jacket extra special, they decided to use letters of the backers of the #PinYourThanks project who wrote letters of support, and these were used for the lining of the jacket. The printed on cotton letters are from people like Stephen Fry, Emma Thompson, and Harry Hill. Jenny Beavan has been nominated ten times for the Oscar for Costume Design, claiming two Academy Awards, for A Room with a View in 1986 and Mad Max: Fury Road in 2015. Since then, Beavan was appointed Officer of the Order of the British Empire in the 2017 New Year Honours for services to drama production. She is known for films such as Howards End, Sense and Sensibility, Gosford Park, and The King’s Speech as well as her work in theatre.

At the time of her latest Oscar win that made the headlines, she said ”I am a real jeans person. I have clothes to dress up in, but [the Oscars] was a conscious thing of not just doing the plain black suit.” Part Of The Ian Berry Expo At Museum Rijswijk

This special patched and pinned denim jacket is now part of the must-see expo from Ian Berry at the Dutch Museum Rijswijk (more about this expo here). which will hopefully be opened very soon again for the public. The jacket will eventually be auctioned off to raise money for NHS Charities Together and Volunteering Matters. 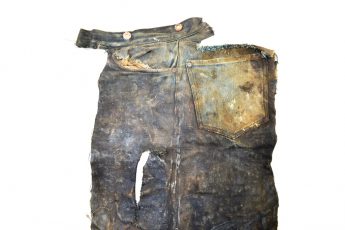 Fisherman of the Day!