Six months ago Eric Maggiori launched his first edition of Avant Magazine. The reactions were overwhelmed, and the kick-off was a huge success. Now, the release of Vol. 2 is coming closer, so time to have a chat with Eric again to hear what we can expect this time. The outcome of the chat is the interview here below which also includes some sneak pages of Vol. 2. Thanks Eric, and good luck with the last preparations!

LJ: How was the launch of the first edition of Avant magazine?

EM: Well, honestly, that was… huge! I released it during Inspiration Show LA in February, thanks to Rin Tanaka who gave me the opportunity to introduce the magazine to all the vintage community. After my trip to LA, I came back to France and I had to send all the magazines that were sold on Kickstarter. And that was definitely a crazy work because I sent all the magazines by myself ! After that, AVANT has been launched worldwide, thanks to my distributor, KD Press. Camille Gressier, the artistic director of AVANT, was in Australia last week and she actually found it in a bookshop in Sydney ! That’s crazy. And the magazine also sells pretty well on my website, theavantmag.com. It’s still too early for an assessment, but I definitely sold way more than I expected. LJ: Who bought the magazine ?

EM: It’s really difficult for me to find out who is the reader of AVANT. What I can say, however, is that many different people were interested. Even people that are absolutely not interested by vintage clothing. As AVANT is more a historical magazine than a fashion magazine, a lot of people can read it and find interesting stories inside. Like my god-mother, she’s 62, she is a History and Geography teacher, and she read everything ! And now she can talk about Stifel and miner’s pants, that’s fun !

LJ: Now, 6 months after the launch, a new edition is coming. What will be the theme of Vol. 2?

EM: First one was American Workwear. I had a few ideas for the second one, but then I decided to do American Military Clothing. LJ: How did you came up to use this theme?

EM: It’s a logical follow-up. There are a lot of bridges between Workwear and Military. I mean, military clothing is actually workwear. So that was obvious to talk about that. And military is related to history…Like vintage dealer Bob Chatt told me in a interview : “Military is a part of every culture“. And it’s true. Every country has faced War in the past century, this is something we all have in common. EM: Because there were already too many things to tell about American Military Clothing!! The US Army, US Navy, US Air Force, US Marine Corps…There are so many stories to tell, I could have done a 400 pages book about it!!

LJ: Is there a relation between Vol. 1 and Vol. 2? If so, could you describe this in a few sentences?

EM: Yes, like I said before, the relation between Vol. 1 and Vol. 2 is in the subject matter. I really love to talk about workwear, the clothing people were using to work. It tells so many things about the history, the culture, the society. So the first issue was really focused on the Gold Rush, the miners, the railroad engineers…And now, it was time to talk about the soldiers. About the uniforms. About the relationship between the man and the uniform. And let me tell you that the stories are really fascinating. LJ: Can you already highlight a bit of the content we can expect?

EM: I don’t want to reveal too much 🙂 There will be fantastic interviews with Max Sardi (@Sanforized on Instagram), Alex Saunders (Saunders Militaria), Bob Chatt, Jeff Spielberg and Paul Milbury. Highlights on some iconic military pieces like Daisy Mae, painted A-2 flight jackets, or P41 UMSC utility. An article about the relationship between denim and US soldiers, a report at the Pomona Military Show and a very interesting article written by french journalist Adrien Candau, about the deontological limits not to cross when it comes to collect militaria. Something I have never read before. LJ: You’re also a fanatic collector. Will there be again some pieces from your personal archive in it too? And can you give a sneak?

EM: Yes. I shared some of my personal archive again but this time, my friend Tom Gruat, french vintage dealer and collector, joined me and brought some rare military pieces. And when two collectors combine their collection, well….it’s worth a look! LJ: Is it still planned to release two editions each year?

EM: Yes I’ll try to keep it bi-annual. Not easy because it’s a lot of work and research, but I’ll try!

LJ: Will it always be related to the American clothing history?

EM: No ! It will not. And I can already say that the third issue will not be about American clothing history. It will be about another country. A country I know pretty well 😉 LJ: When is the release date of Vol. 2? And how can we get our hands on it?

EM: I don’t have the exact release date of Vol. 2. Right now, we have 95% of the magazine done. We have to set up the last details, and it will be probably finished at the end of September/early October. After that, it will take two weeks to print. So I’d say mid-October, maybe end of October because we know there are always delays. But there will pre-orders available very soon on the website theavantmag.com. I’ll let people know on Instagram! LJ: What about the cover? Would it be again a painting by your brother Mark Maggiori?

EM: No ! It will be a painting, again, but not by Mark. This cover is made by Brett Allen Johnson, a very, very talented painter from Salt Lake City. You can see his art here. It’s really beautiful. And so will be the cover!

Get in the Avant Vol. 2 mood by watching this trailer; 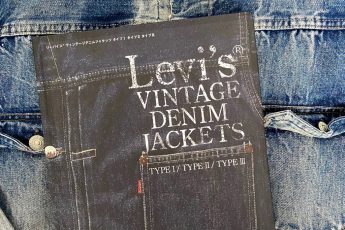