Levi’s Jeans has a long history in the denim industry. The brand is one of the pioniers as it comes to unique denim developments. Since 1873 Levi’s Strauss & Co has been a leader in the industry. In the year before, 1872, Levi Strauss received a letter from one of his fabric customers, Jacob Davis, a tailor from Nevada who invented the rivet, with a question if they could partner-up together for the patent for the rivet. They joined forces and the rest is history.

Next to the rivet Levi’s Jeans has some more very important key features on their jeans. Today I want to zoom in at the 7 key details from the back pockets of their jeans.

The top 7 key features of the back pockets of Levi’s Jeans;

Feature #1: The Arcuates On The Back Pockets

The stitching on the back pockets from a pair of Levi’s Jeans is called Arcuate design. The name refers to the form of an arc. The arcuate stitching dates back to the earliest Levi’s waistoveralls from 1873. The arcuate stitching probaly refers to a flying rocky mountain eagle. This can’t be confirmed by the company as the Levi’s headquarters and two factories were destroyed after a heavy earthquake and fire in San Francisco in the year 1906. The earthquake destroyed their complete archive.

The first Levi’s Jeans arcuates on the back pockets were stitched with a single needed sewing machine. Picture from a pair of Levi’s 1878 pants from the Levi’s Vintage Clothing (LVC) collection. Pic by Unionmade store.

You will see various different single needed arcuate curves on vintage pairs of Levi’s back pockets, this reflects each operator skills. These curvy arcuates are also known as Crazy Eagle. 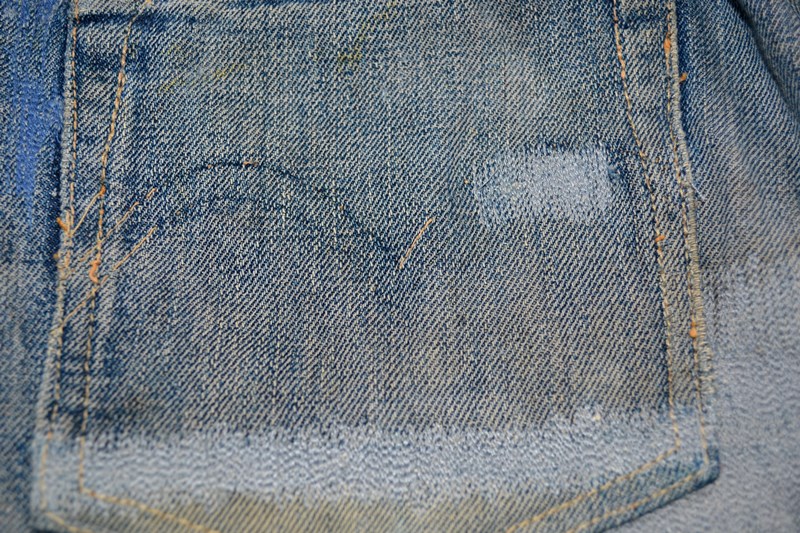 This can be seen on this original worn pair of Levi’s 501XX from the 1930’s. See more details of this pair here.

In 1943 Levi’s Jeans registered their arcuate as a trademark to prevent copying by other denim brands. After World War 2 Levi’s Jeans started to stitch their arcuates with double needed sewing machines. The picture here below shows the double stitched arcuate on a vintage pair of Levi’s 501XX jeans from the late 1960’s. See more details of this pair here.

Double stitched arcuates on the back pocket of a vintage pair of Levi’s Jeans.

Another funny fact of the double stitched arcuates is the appearance of the diamond in the center of the arcuates. This diamond appears when the double needled thread overlaps eachother.

The orange (tobacco) thread used on the original Levi’s Jeans has now become an industry standard. Legend has it that tailor Jacob Davis originally insisted that the thread has to be orange to match the jean’s copper rivets. But Levi’s Jeans can’t confirm this rumor as all the records are destroyed by the earthquake in 1906.

On vintage pairs of Levi’s Jeans, mostly on early ‘Big E’ jeans, you see a combination of yellow and orange thread.

Combination of orange and yellow thread of back pocket of vintage pair of Levi’s Jeans from the early ’60’s.

The Batwing is designed in 1967 by Walter Landor & Associates. The colour red was used as a link to the Levi’s Red Tab. The outlines of the Batwing logo comes straight from the Levi’s 501 Jeans back pockets. If you look closely at the back pockets you should see the Batwing just above the arcs of the arcuate design. 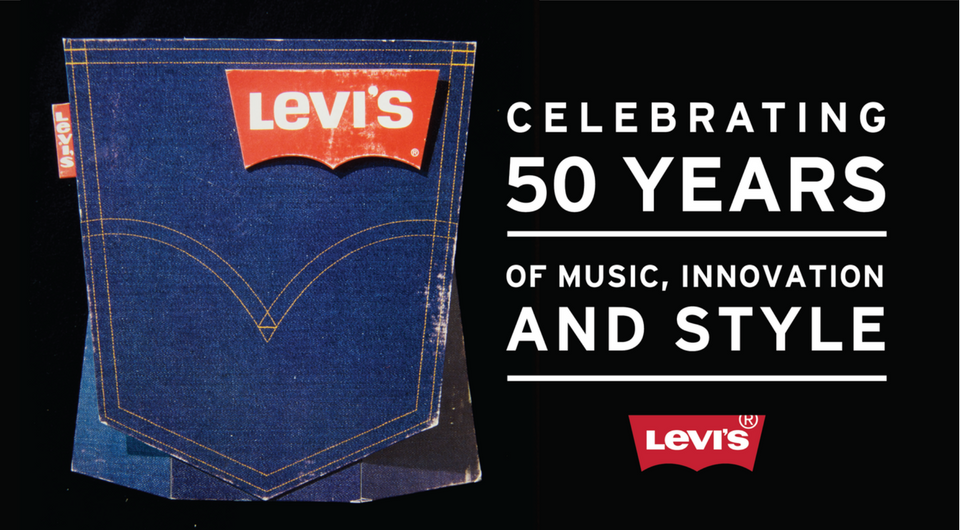 In 2017 it was 50 years ago that the Batwing logo by Levi’s Jeans was introduced.

The Batwing logo is really popular by youth at the moment. In the first half of 2017, Levi’s sold more than 3 million of their Batwing t-shirts.

It was the year 1936 that Levi’s Jeans introduced their famous Red Tab onto the right back pocket of their jeans. The Red Tab was created to differentiate Levi’s Jeans from their competitors. This was because a lot of their competitors were also using dark denim and also arcuates on the back pockets. The colour red for the Red Tab was chosen because it contrasted well with the dark denim and was easy to see. The idea to place a red folded cloth ribbon in the structural seam of a rear patch pocket came from the National sales manager Chris Lucier from Levi’s Jeans.

The word LEVI’S is stitched in white in all capital letters on one side only of the tab in the beginning. During the early ’50’s they changed the Red Tab into a double-sided Red Tab which means that on both sides of the tab LEVI’S was written.

Vintage ‘Big E’ tab on a vintage pair of Levi’s 501XX from the ’60’s. See more detail shots of this pair here.

Levi’s Jeans switched in 1971 the letters on the tab to Levi’s, with a lowercase ‘e’ instead of the ‘E’ in the word Levi’s. The Red Tab with kapital ‘E’ are nowadays known as ‘Big E’ items and were produced until that year. The ‘Big E’ items are now true collectors items amongst denim collectors.

Levi’s Jeans Red Tab with lowercase ‘e’ on a pair of Levi’s 501 Jeans from the early ’70’s. See more details from this pair here.

Some Red Tab on Levi’s Jeans are blank and only has a registered R on it. 1 out of 10 Red Tabs on the backpockets of a pair of Levi’s jeans is a blank Red Tab and does not include the full name of Levi’s. This to protect the Red Tab itself. 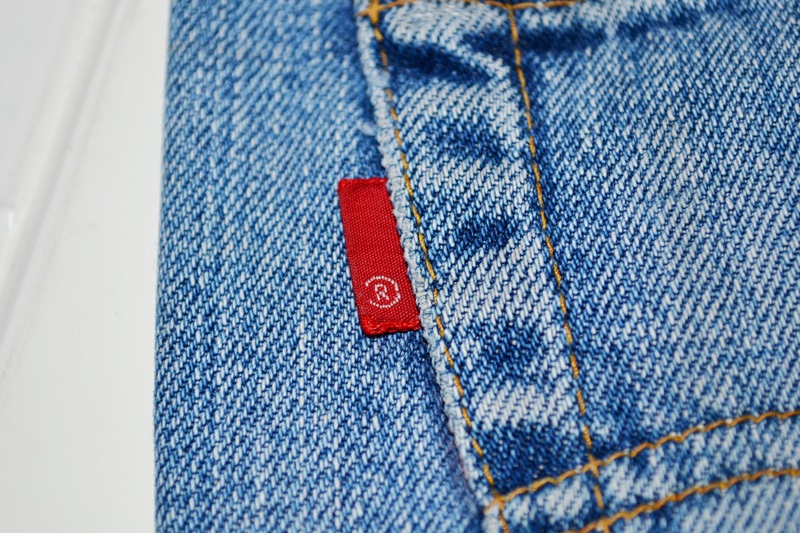 Blank Red Tab of a pair of vintage Levi’s Jeans from the early ’70’s. See more shots of this pair here.

Another key feature on vintage pairs of Levi’s Jeans are the so called hidden rivets. In 1937 Levi’s Jeans introduced these hidden rivets on the back of the pockets. The rivets were sewn so that they were only visible from the inside, due to consumer complaints regarding scratching furniture and saddles by the previous rivets that were placed on the outside. As Levi’s 501XX Jeans were popular by cowboys they complaint about their scratched leather horse saddeles. Vintage pair of Levi’s 501XX Jeans from between 1901 and 1910 with rivets on the outside of the backpockets. Pic from the Levi’s Jeans HQ from San Francisco. 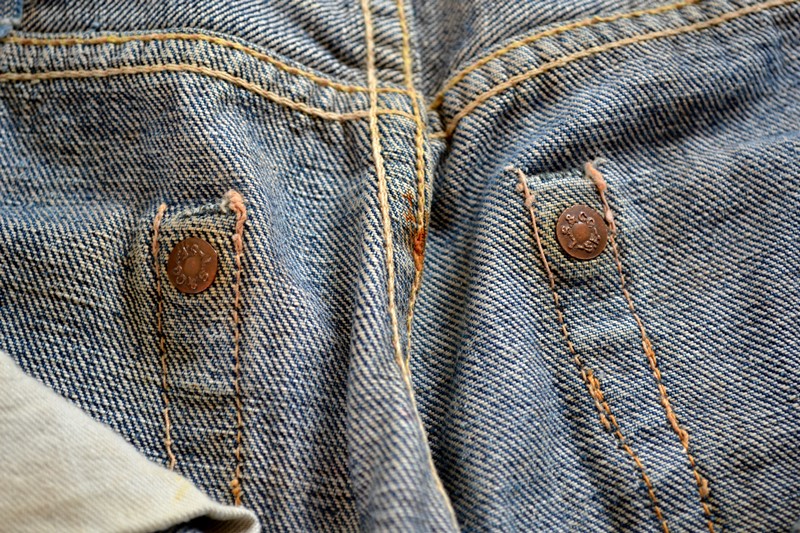 On each pair of Levi’s Jeans 501XX produced from 1937 was a pocketflasher with the words: ‘The Rivet’s Still There’ as introduction of the hidden rivets. 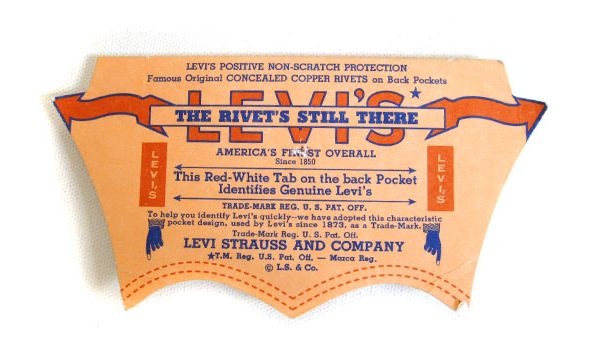 The Levi’s pocket flasher with the words: ‘The Rivet’s Still There’.

Levi’s Jeans changed in 1966 their hidden rivets into bar tacks on their jeans. Technology made it possible to strength the back pockets with bar tacks instead of rivets. This was the end of complaints about scratching furnitures. Note that also the hidden rivets came through the denim fabric after intense wear, so bar tacks were the perfect solution. 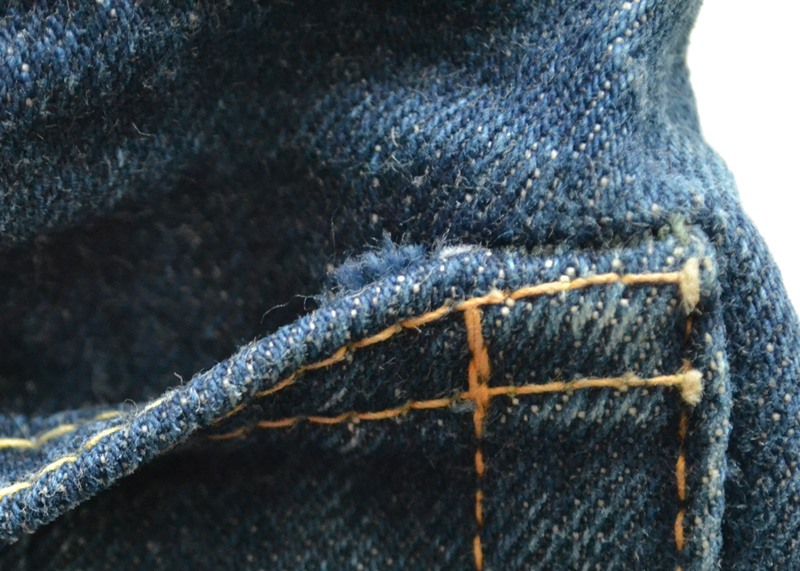 Black bar tacks on the corners of a vintage pair of Levi’s Jeans.

The horisontal double felled seams on the top of the back pockets of vintage pairs of Levi’s Jeans are single stitched. Later 501 models from around 1987 and later are chain stitched. 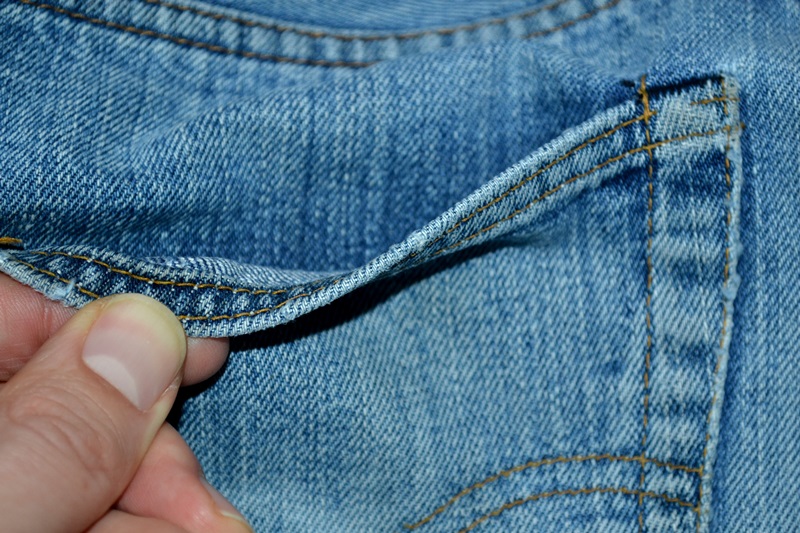 Single stitched back pockets on a pair of vintage Levi’s Jeans. 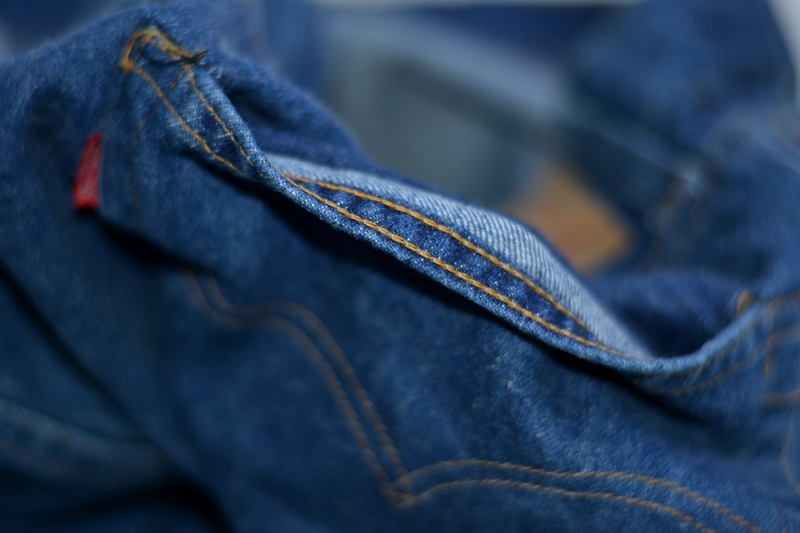 Chain stitched back pockets on a pair of late ’80’s Levi’s Jeans.

Feature #7: The Fifth Back Pocket Vintage pair of Levi’s waistoveralls from 1880. This pair was bought by Levi’s Jeans in 2001 through an eBay auction for $46,532. This pair is know as one, maybe the oldest, pairs that is still alive. Now part of the Levi’s Jeans HQ archive in San Francisco. Levi’s 501 Jeans from 1901 from the Levi’s Vintage Clothing (LVC) collection. Pic from eBay.

If you also want to educate your (denim) employees with more knowledge about denim so they can act better, please feel free to send me an email with the possibilities to: wouter@long-john.nl