Levi’s Vintage Clothing (LVC) released last year already a brown version of their Menlo Cossack Jacket, but yesterday the black version was officially launched. The jacket is a replica of a 1930s garment originally belonging to Albert Einstein.

The black edition is available as a limited edition to 500 pieces, and available at selected Levi’s stores, and via their online store as well. The Story Behind The Jacket

In July 2016, Levi’s won the auction at Christie’s in London for the brown Albert Einstein jacket. The jacket is synonymous with Einstein’s early years in the United States during the 1930s, the time in which Einstein and his work achieved global notoriety.

As Einstein was a pipe-smoker, the original jacket had the smell of sweet pipe tobacco, even after 60 years after his death. As Levi’s idea was to recreate the jacket, this time in black, the best possible, they came up with the idea to recreate the tobacco smell too. Therefore they teamed-up with Brooklyn-based perfume house D.S. & Durga. The result is a warm blend of burley pipe tobacco, papyrus manuscripts, and vintage leather. Details Of The Jacket

The jacket is made of 100% Italian black sheep leather and features front button closure, side pockets, and a collar. Unlike Levi’s Vintage Clothing first Einstein repro jacket last year, the brand opted for a black iteration this go-round, inspired by the concept of Einstein attempting to disguise his signature style.

Each jacket comes with a bottle of the exclusive scent, and also a replica of the No. 97 auction paddle that was used to bid on this historic garment. It will be packaged in a special edition box. The jacket is produced in Italy. “It’s the first time that I’ve had the opportunity to reproduce a garment that belonged to such an icon and a huge personality of the twentieth century,” said Paul O’Neill, Head Designer, Levi’s Vintage Clothing. “It was such an honor to reproduce Albert Einstein’s jacket. He’s a legend.” 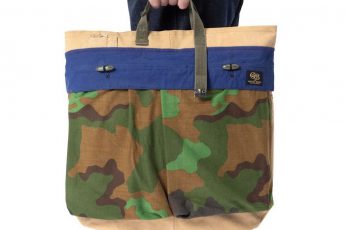