Naked & Famous will release tomorrow their special Ghostbusters collection. The collection features unique fabrics inspired by the classic 1984 Ghostbusters film. The collection contains 2 pairs of jeans and 2 jackets. One of the 5-pockets jeans is this ‘Supernatural Selvedge’ pair with a very special selvedge ID. This Naked & Famous jeans is made with an 11oz rope-dyed indigo raw denim fabric. This 100% cotton fabric is woven on vintage Japanese shuttle looms and finished with a selvedge ID coated in chemiluminescent phosphors that glow in the dark when charged with direct light or under blacklight. You can find these selvedge ID on the coin pocket too. On the inside of the waistband, there’s the Naked & Famous Denim x Ghostbusters co-branded woven label. Every pair of jeans comes with a keychain blacklight, so you can light ‘em up whenever you want. On the inside, the pocket bag is screen printed with Peter Venkman, Raymond Stantz, Egon Spengler, and Winston Zeddemore. The classic ‘No Ghost’ logo is embroidered on the back pocket, in the original white/red colors. Like a lot of special jeans from the Canadian denim brand, this one has also a special pop-art style leather patch. This time they developed a version with the image of Janine Melnitz at Ghostbusters HQ taking calls. It’s embossed into the glow in the dark leather patch. The word bubble contains a new co-branded Naked & Famous Denim X Ghostbusters logo. On top of that, they also made a special pocket flasher too.

The jeans will be available from Monday the 21st of October. About The Ghostbusters Film

The Ghostbusters film was originally released on June 8, 1984. This film became a cultural phenomenon. It was well-received for its blend of comedy, action, and horror, and Murray’s performance was repeatedly singled out for praise. The film earned $282.2 million during its initial theatrical run, making it the second highest-grossing film of that year, and the highest-grossing comedy of all time at that point. It was the number one film in theaters for seven consecutive weeks and was one of only four films to gross more than $100 million that year. 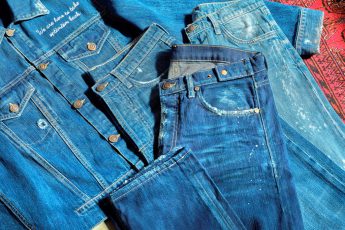 « Previous post
Mr Porter Presents Film: How Japanese Denim Is Made
Next post »
Denim Days 2019 Is Coming To Amsterdam Again!