A fresh new batch of Long John t-shirts are added to the webshop section. Some years ago these shirts were already available, but they were sold out real fast. After a lot of requests they’re back on stock again. This batch of shirts are made in round neck versions instead of v-necks.

T-shirts have a pretty long history. They’r also known as tee. The name of this clothing style is coming from the T shape of it’s body and sleeves. Normally t-shirts have short sleeves and a round neck. These round necks are also known as crew neck. The common t-shirts with a round neck became very popular during the 1950’s when famous actors as James Dean and Marlon Brando started wearing them in the now cult denim movies. They’re now part of the ultimate denim outfit.

Both shirts have the authentic Long John anchor logo on it. The white version has a small blue chest print and on the back a large blue LJ anchor print. The blue version has only a small white LJ chest print. A bit more sophisticated.

The shirts are from the Kariban brand and weights 180 grams. The print is screenprinted by hand in The Netherlands. They’re now available here. 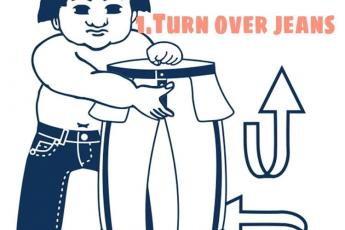 How To Wash Your Jeans By Momotaro Jeans