Brave Star Selvage from Los Angeles is strong in creating selvage pairs of jeans for a very sharp price. Their products are made in the U.S. and are made of highquality fabrics. Brave Star wanted to develop an additional pants in their denim collection. They decided to go for a classic chino, a Cramerton army cloth, made from 9oz sanforized selvage twill. The fit of the Brave Star chino is a tapered version with a top block that slightly fits easy through the hip, the thigh and the knee. This style was standard for the uniforms through WWII, Korea and Vietnam wars.

Brave Star considered that the chino has to be a tailored pant which means single needle construction throughout the entire garment. This equates to a much slower, yet more meticulous production process. Truly hand crafted.

What Is Cramerton Army Cloth?

Cramerton’s famous 8.8oz ‘Army khaki’ was first manufactured in 1929.  Major Stuart W. Cramer, Jr. an officer in the US Army strongly influenced the decision to develop an improved fabric for military uniforms.  Developed out of necessity after the failure of the ‘doughboy’ uniforms used by the military in World War I, Cramerton Army Cloth became the standard basic uniform cloth throughout the armed forces. This fabric saw service through World War II, the Korean and Vietnam Wars.

At the beginning of World War II, Cramer voluntarily released the technical know-how to allow other producers to duplicate his fabric as ‘Cramerton Army Cloth’.  It is still being produced in South Carolina by the original mill. 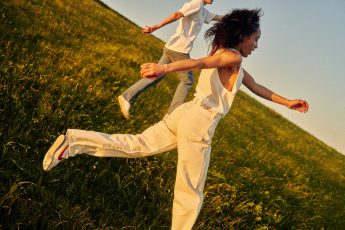 The 100% Vegan Approach By HNST Jeans For A Better Tomorrow