Red Wing just launched again a new killer of a limited edition boot. It’s the RW 8884 6″ Classic Moc Mossy Oak Camouflage. The Red Wing Shoes 8884 Classic Moc Toe in Mossy Oak Camouflage is a Classic Red Wing Shoes Mocassin style and is made in Red Wing, Minnesota. The Red Wing 6″ Moc Toe boot was originally designed for hunters and farmers in the early 1950’s. The Mossy Oak camouflage leather has a very unique pattern of Autumn leaves. Actually this style made a comeback as it was original released around 2004 / 2005 in very low quantities. This boot was an instant hit by Red Wing fans, and it was difficult to get your hands on a pair. So it’s great to see that it’s back again. This time it’s also a limited edition, so be quick with this one! Get your pair here: www.redwingamsterdam.com 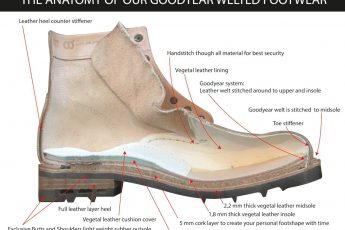 The Anatomy Of The Butts And Shoulders Footwear