Rocky Clark Clothing was founded in 2015 by Joseph Rotondo. Since their start, they’re creating sustainable goods produced in the United States. Now, four years after their launch they just started a Kickstarter campaign for their new Utility Panel Pants.

The Kickstarter campaign is released to fund their new RC001 – Utility Panel Pants. After making multiple samples, and test the pants for over two years by friends and family, its time to get them into production. The Goal Of The Campaign

Their goal is to produce 100 pairs of new pants. The funds with their Kickstarter campaign is to purchase fabric, trims (buttons, labels, threads, etc.), and the labor to handcraft their jeans to perfection. Their stretch goal of $20,000 will allow them to create woman’s pants as well.

The new Rocky Clark pants are made of 100% organic cotton. The denim fabric is coming from the Italian denim mill Candiani. The new pants is coming in two different colors; graphite and navy. The fit of the pants are slim with slanted front pockets, and large back pockets with a flap closure. They have reinforced double knee panels, and a four button closure. On the back of the pants is a Military grade name tag stitched with the brand name. For the pants, they use organic cotton, so they used less water than conventional cotton, to make it more eco-friendly. The fabric is also developed using a unique way to dye the fabric by using vegetal Chitosan. Vegetal Chitosan is a chemical compound found in food waste such as shrimp shells, mushrooms, and algae that allows the dye to attract to the organic cotton fibers much easier. This cuts down on water and energy used in order to dye the denim. It uses 75% less water and 65% fewer chemicals!

Everything is in place in order for Rocky Clark to produce these jeans. They have been working with Candiani for a couple of years now, ensuring fabric availability. The Utility Panel Pants will be produced in New York City. The expertise and craftsmanship in this facility are integral to the brand. But to make the production happen they need your support, so go to Kickstarter and support the new Rocky Clark denim project here. 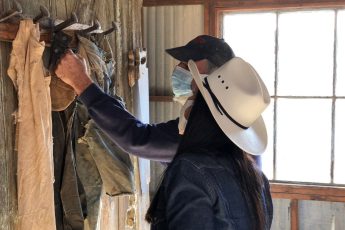