The First Drop Of Popeye

The SchoolofLifeProjects is an initiative by Lilian and Harry Wonder-Vos started in September 2019. After visiting a traditional wool factory in the heart of Portugal their vision of the future of the fashion industry changed completely. This resulted in the launch of their unique blankets and ponchos.

Now, the couple is making the next step with their SchoolofLifeProjects initiative as they bought the license of Popeye. For the first drop, they worked together with Eric Jost, known for his inspiring Life Time Gear blog. Eric Jost works for the German-based AMTRAQ distribution company, a company that is strong in the distribution of many brands that focus on heritage and quality, brands with an authentic story. As Eric loves the most famous sailor cartoon, Popeye, partnering with SchoolofLifeProjects was a logical step. Especially when you know that Popeye is eternalized with a tattoo on Eric’s right arm.

The Story Of Popeye The Sailorman

Popeye is a character created by Elzie Segar on the 17th of January in 1929. From 1933 onwards he appeared in the cartoons of
Max Fleischer and Dave Fleischer. He became one of the most important comic and cartoon characters in the world.

The sailor is most known for becoming super strong by eating spinach. He was responsible for the spinach myth which was created during World War II as the US government did not know how long the war would continue, they started to stimulate the reduction of meat in the daily menu of the US people. By eating more potatoes and vegetables, in particular spinach, the import of expensive meat from Europe could be limited dramatically. The History Of The Ringer T-Shirts

The story of the original ringer t-shirts goes way back. A ringer tee is known for its usually white, with colored ribbed trims on the sleeve and the neckline. The contrast-colored trims on the sleeves draw the eyes to the center of your biceps and the widest part of your neck. Legends such as Marlon Brando were wearing a ringer t-shirt in the movie The Wild One in 1953 too.

While the original vintage sailor tees are very long and narrow and difficult to wear in a casual outfit, SchoolofLifeProjects made a variation on the original ringer tee which has all heritage features in it. They decided to stick to the original white and navy color combo as it fits perfectly with denim. The Details Of The Ringer Tee’s

The first drop of SchoolofLifeProjects ringer t-shirts features two different Popeye graphic designs. They’re made in 240 grams of organic cotton, screen printed with Popeye on the front and Popeye with anchor and Swee’Pea on the back. The t-shirts are produced in Portugal in a certified factory owned by Swiss and Portuguese partners. The factory supports and provides work for the local community in Trofa. The Availability Of The Popeye Shirts 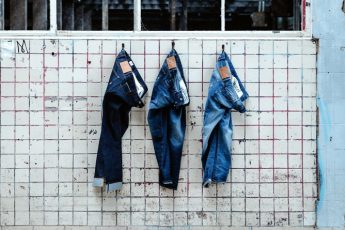