The 10 Most Important Years By Levi’s, Lee & Wrangler

There’re many historical facts and important years in the history of denim. Of course, there’re way more important years and facts than just 10 about Levi’s, Lee and Wrangler, but let’s start highlighting just 10 of them. 10 important years of the three American denim brands that are also known as the Big 3. Years that a true denim head must know, just for fun, or just because you want to learn a bit more about denim, and in this case, about the Big 3. So, here you go!

1 – 1853: Levi Strauss opens his own dry goods business to serve the small general stores of the American West during the Gold Rush period in San Francisco.

2 – 1873: On the 20th of May, tailor Jacob Davis and Levi Strauss received their U.S. patent for an ‘Improvement in Fastening Pocket-Openings’ by using metal rivets on work pants for miners. Fun fact: They had to pay roughly $68,- for the patent. Denim nerd fact: This rivet patent is known as No. 139,121.

Learn more, and see original examples, about the rivet here.

3 – 1889: Henry David Lee and four business partners established The H.D. Lee Mercantile Company in Kansas. They sourced groceries and other staples from around the world and packaged them for distribution to dry goods and grocery stores under the Lee brand.

4 – 1890: Levi Strauss launched their 501 jeans style for the very first time. Fun fact: They also launched the cheaper 201 jeans, which was a less expensive version of the pants, as well as other products using other three-digit numbers.

5 – 1901: Levi Strauss added for the very first time the fifth pocket on their overalls (jeans). This was the left back pocket, so this was the birth of the five-pocket jeans. Fun fact: most people think that the fifth pocket was the coin or watch pocket.

6 – 1911: The H.D. Lee Mercantile Company opened its first garment factory in Salina, Kansas, to produce overalls and work jackets. Fun fact: Their first garment was called the Bib-Overall and was originally made in 8oz denim and had a multi-function breast pocket and a button fly.

7 – 1927: The first jeans were made with a zipper (hookless fastener) by Lee Jeans. Nowadays a standard on most women’s jeans, but also popular in men’s styles as well. Fun fact: Lee held a national contest to name its new zip-front overalls, coveralls, and playsuits. The winning name was ‘Whizit’, based on the sound it makes.

8 – 1934: Levi Strauss introduced the first blue jeans for women. This jeans was named Lady Levi’s. Fun fact: The jeans was first developed for Western women wearing Levi’s jeans on farms and ranches. The new jeans was also aimed at women vacationing at dude ranches, working cattle, or horse ranches that welcomed guests flocking from eastern states or even Europe.

9 – 1947: The Blue Bell company launched their Western jeans brand Wrangler. Their first jeans, the 11MW, were designed by celebrity tailor Rodeo Ben, are were introduced to the American consumer. Fun fact: The name 11MW refers to the 11oz of the denim fabric and MW to Men’s Wear.

Extra Wrangler fun fact: 1996: 1 in every 5 pairs of jeans sold in America is Wrangler.

In case you want to learn more about denim, this to train yourself, store or brand staff more or better, send me an e-mail to: wouter@long-john.nl to discuss the opportunities how we can achieve this. I’m happy to learn you more (fun) facts about denim! 10 Fun Facts You Need To Know About Denim 5 Reasons Why You Need Skilled Denim Store Staff These Days 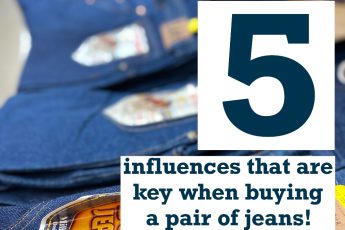 5 Influences That Are Key When Buying A Pair Of Jeans