A fine pair of jeans is the basis of each outfit. Weather you prefer an original rigid one or a pre-washed version. The most classic is blue. And in some cases and for some people it has to be black for that true rock and roll feeling. One thing is a fact, with a good pair of jeans you can’t go wrong. Wear this with a plain t-shirt, rough pair of boots and a denim or leather jacket and you’re ready to go!

If you want to complete your outfit and making it really outstanding than a good watch is needed too. It’s one of the few accessories that every legend has on his wrist. If it was Che Guevara, James Bond or Steve McQueen, they were always seen with the coolest watches on earth. Those watches became more than just a handy accessorie to know the correct time. They’re a symbol for rebels or gentleman with taste. A timeless taste as most of those watches became true collectable pieces.

But what are the best watches to wear with your daily denim outfit? We asked Biejan Poor Toulabi from Amsterdam Vintage Watches to share the Top 5 Denim Watches. Below the list so you know which one to pick from their amazing vintage watch collection. They’re all available in their store and/or online.

The Rolex Datejust is the perfect everyday watch: it’s sturdy, features a useful date window, and comes in a classic 36 millimetre size. The classic Jubilee bracelet is the perfect everyday Datejust companion, but you can switch it up with a nice strap every once in a while. How about dressing it down by slinging it on a Tenue des Nîmes x AVW denim strap or pairing it with a black alligator leather band when putting on a slick suit. The Rolex Submariner is without a doubt the most iconic wristwatch in the world. Designed and built for divers, it’s built like a nuclear sub and will most likely outlast you. You may have seen it being worn by luminaries such as Jacques Cousteau, Che Guevara, Steve McQueen, and Sean Connery as James Bond! The travel-inclined denimhead need not look any further than the inimitable Rolex GMT-Master. The GMT was developed in the 1950’s after Pan-American Airlines requested an accurate wristwatch for it’s flight staff that could display multiple time zones simultaneously. With vintage GMT’s there are several dial and bezel configurations available, but the perfect denim pairing is without a doubt the red and blue ‘Pepsi bezel’ execution. The Rolex Submariner might be the most recognizable watch in the world, but the Omega Speedmaster comes in a close second. Initially, developed by Omega as a chronograph for race-car drivers, it was soon adopted by NASA as it’s official flight watch. The watch was famously worn by Neil Armstrong and Buzz Aldrin during the first moonwalk in 1969 (earning it the nickname ‘First Watch on the Moon’) and has accompanied astronauts on orbital and lunar missions ever since. Who said that denim can’t be paired with a dressy vintage piece? The Jaeger-LeCoultre Memovox is one of the coolest watches ever made, sporting a very modern size (37.5 millimetres) and featuring a mechanical alarm so that you’ll never forget about that important meeting again! Let’s be honest, wouldn’t you rather feel the Memovox’ zooming alarm on your wrist instead of that boring iPhone alarm? Amsterdam Vintage Watches is a family-run business, established in 1987. Located in a beautiful historical building in the heart of Amsterdam. After a new generation took over, AVW underwent a complete renewal and is now one of the leading boutiques in vintage luxury watches: a worldwide favourite among collectors and connoisseurs alike. Amsterdam Vintage Watches is now proudly being run by Jasper Lijfering. He was infected by the watch virus at the tender age of 12, being constantly surrounded by vintage treasures since his childhood. Ever since his passion evolved and his knowledge grew. Jasper’s first love was a Rolex GMT “Pepsi” 1675. Before taking over his parent’s shop in 2014 he studied to become a jeweller entrepreneur at Schoonhoven College and has worked at several jewellery shops in Amsterdam. However, he really learned the tricks of the trade working in the field of this utterly interesting market.

He developed a refreshing style which is unknown in the rather haughty luxury watch market. Unorthodox maybe, but staying true to his values whilst being transparent. Never afraid to share his unvarnished opinion on social media or in person. His passion is widely appreciated and bonds people from all over the world, sharing the same interest: quality timepieces. Read more about Jasper Lijfering in Meet the Collector #13: here. 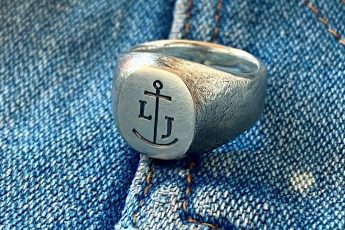