Hunting on vintage jeans is like hunting for gold which the miners did back in the 1850’s in California. You never know if you find something interesting for your collection. It’s about luck and being there on the right time. If it’s on the internet at places as eBay, Etsy or in thrift stores or fleamarkets. And it’s about finding something that fits your vintage denim collection. A timeless and historical piece that is on your wishlist for such a long time. Sometimes you see an item that glips in front of your nose as someone else was bidding more or was a bit faster. But when you win an auction or being the first one at a vintage sale it feels like winning the jackpot. The blue gold jackpot!

This vintage pair of Lee jeans is from the cowboy period. A period that the brand was focussing on true cowboys and their lifestyle at ranches. Also the kids were dressed in these cool blue jeans. It reflects an important period of the denim history. And a cool piece of history as the cowboy period is true Americana. Just as jeans itself.

Take a look below to see all the rich details of this original pair of Lee kids jeans from the 1930’s. And good luck with treasure hunting.

A Closer Look At The Details

The front of the Lee kids cowboys jeans. 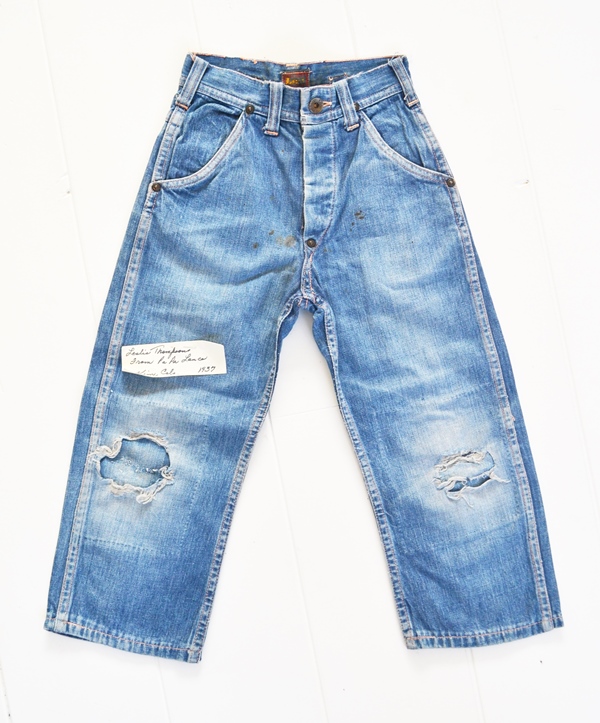 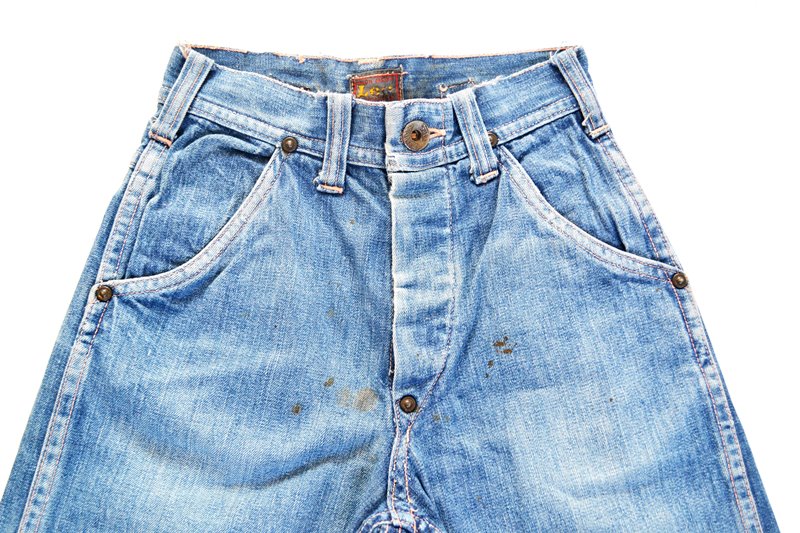 Waistband label shows Union Made with Sanforized Shrunk stitched in the classic black/red/yellow Lee colours. If you look closely you will see that Lee is stitched with the so called ‘looking-up ee’s’. The waistband label is placed in the center. 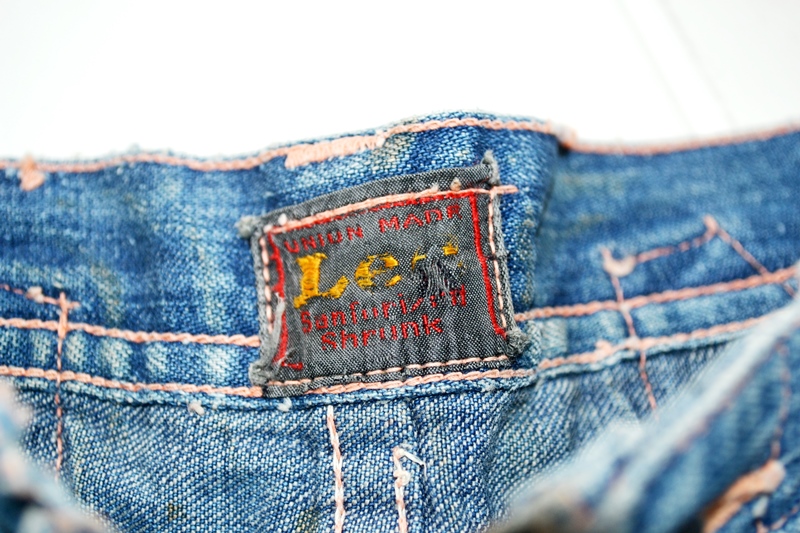 The top button of the jeans shows Union Made and Lee is written with a long L. 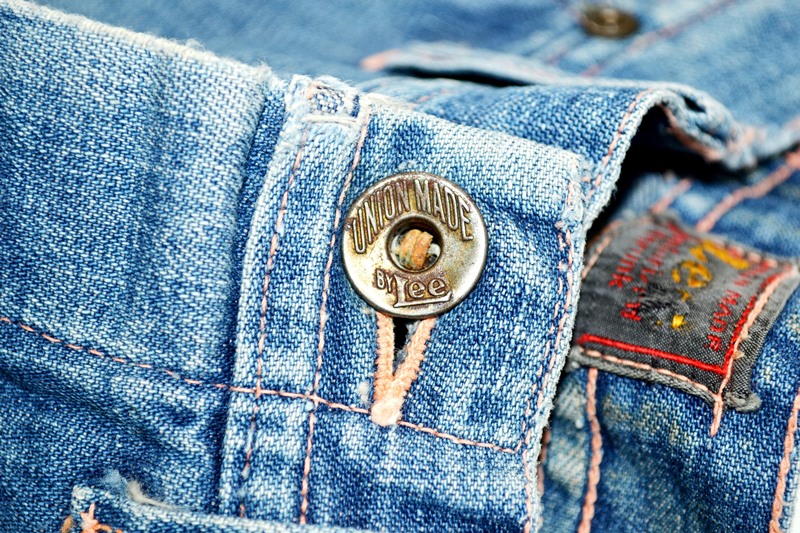 As it is a kids jeans it has only three buttons at the closure. The other two buttons are unbranded, something common in this production period. 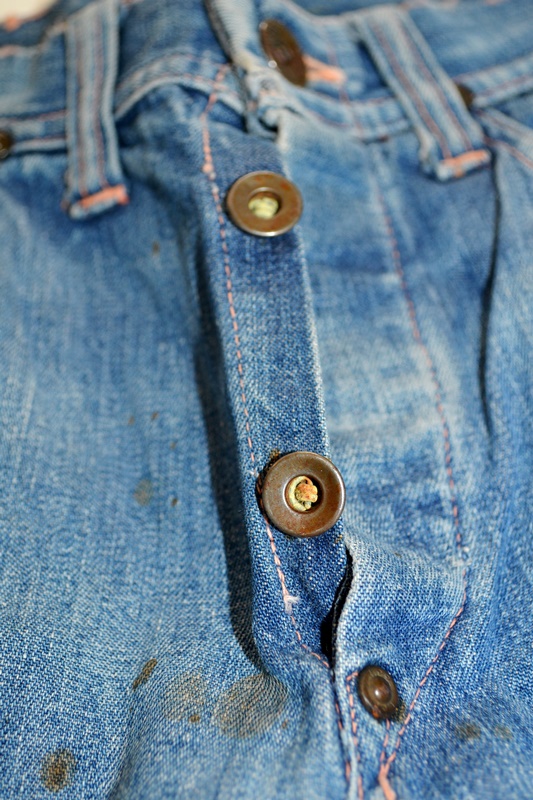 The closure is strength with a crotch rivet. The crotch rivet disappeared during World War 2 at most of the jeans. This was because everyone had to save materials for war. Another myth is that the crotch rivet dissappeared because cowboys would burn their crotch while sitting to close at a campfire and the rivet became too hot ; ) 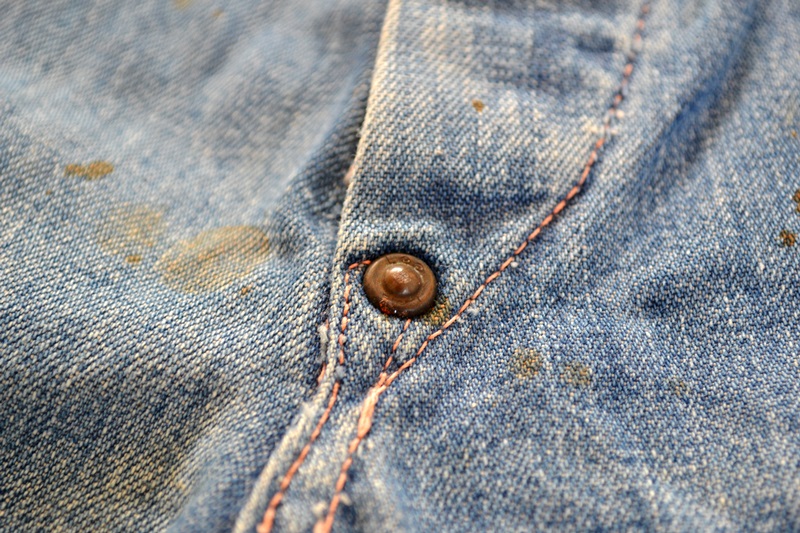 The jeans has a sort of slanted pockets to slip in easily. 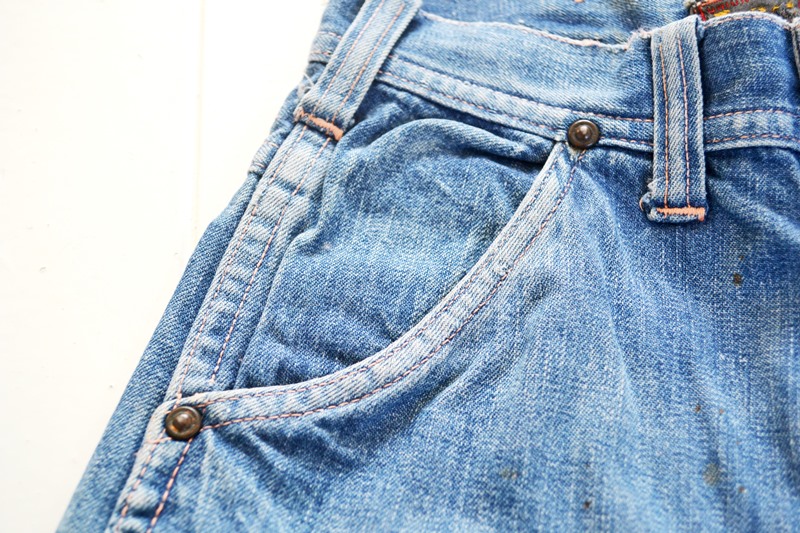 This note was attached on the jeans when I bought it from the guy who bought an old farm at a real estate sale. It was sold by the family of someone that passed away. 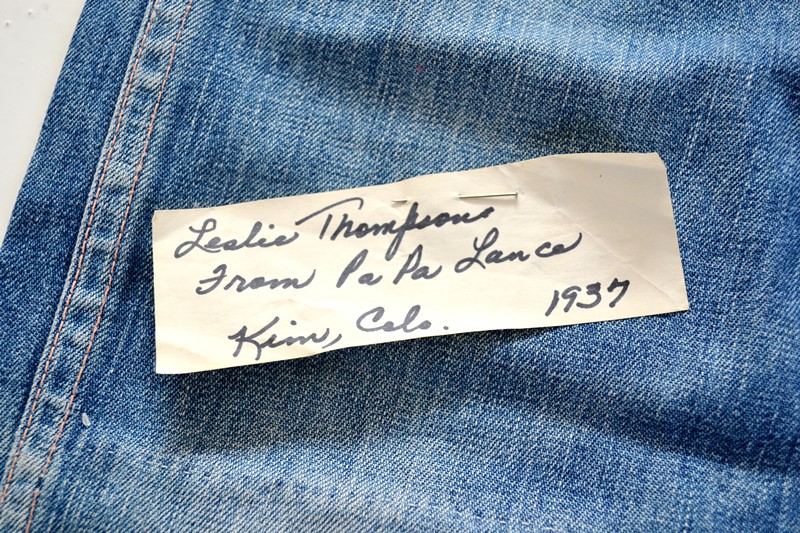 Both knees are repaired by hand. They did the repairs with a right hand fabric, same as the jeans itself. 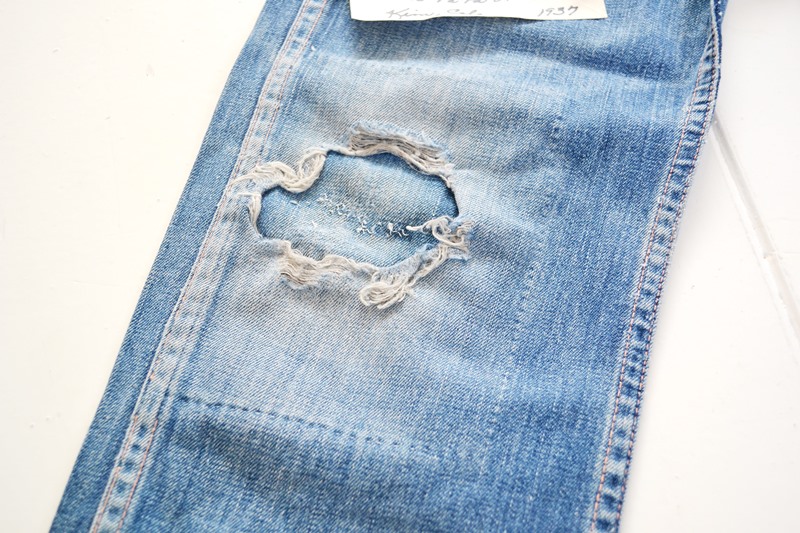 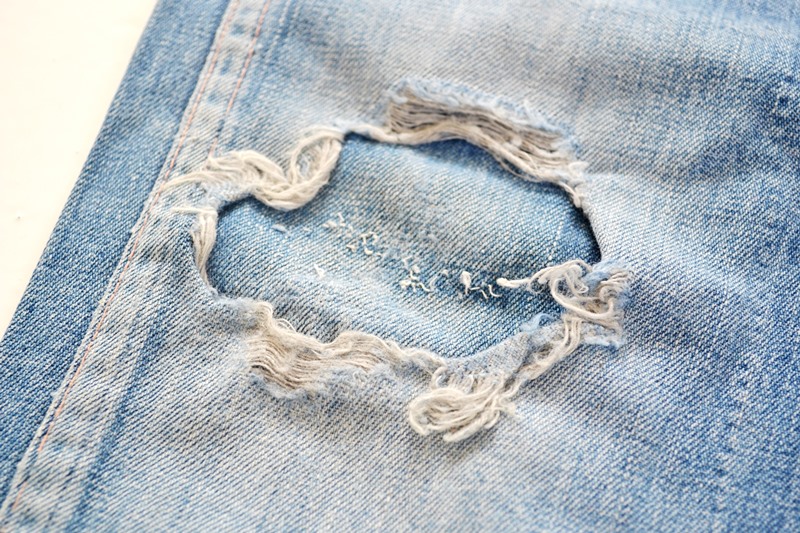 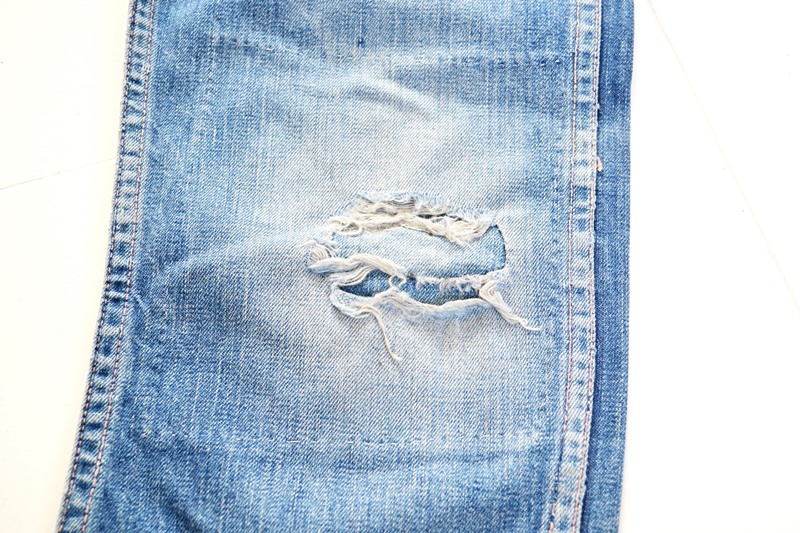 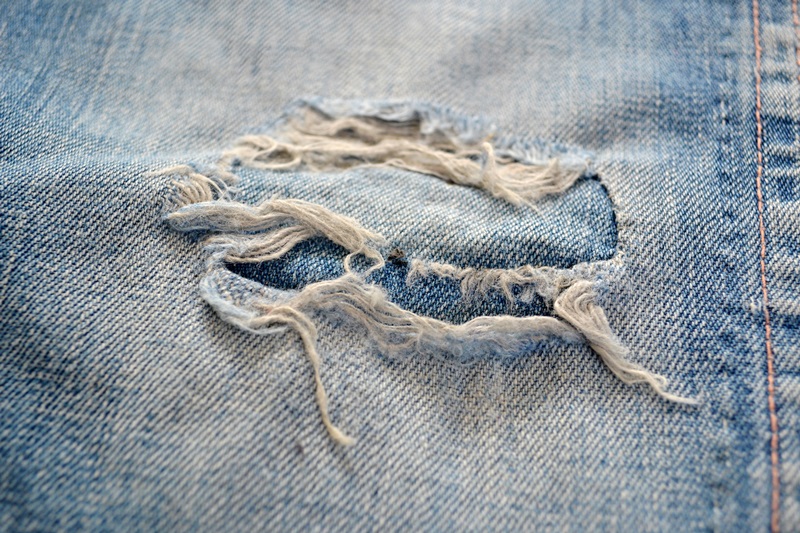 The jeans is made from non-selvedge fabric. You can see clearly at the hem that the entire jeans is stiched with orange thread, something typical from the 1930’s period. 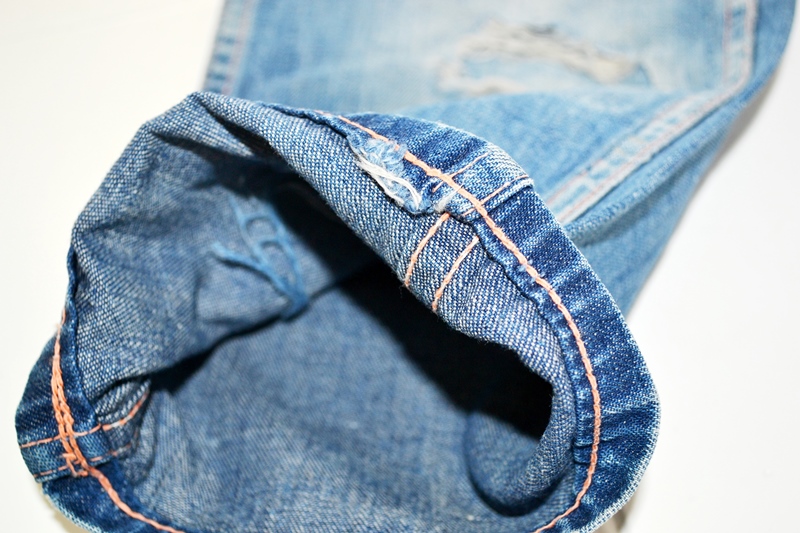 The back of the jeans. 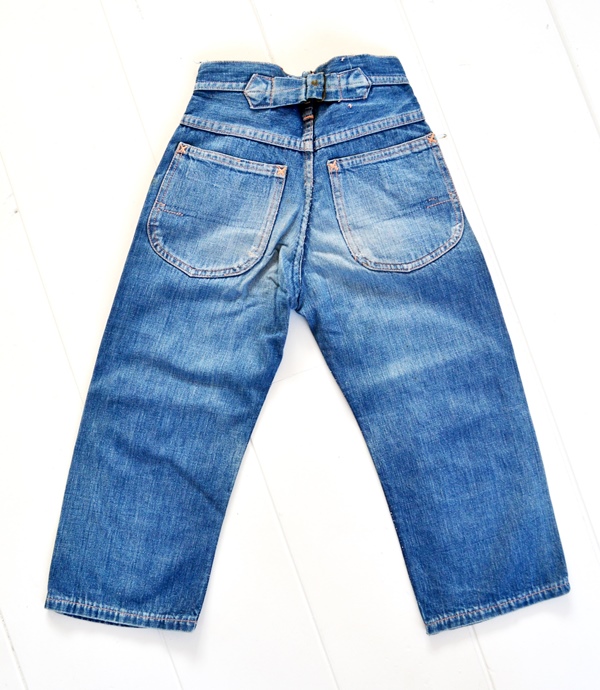 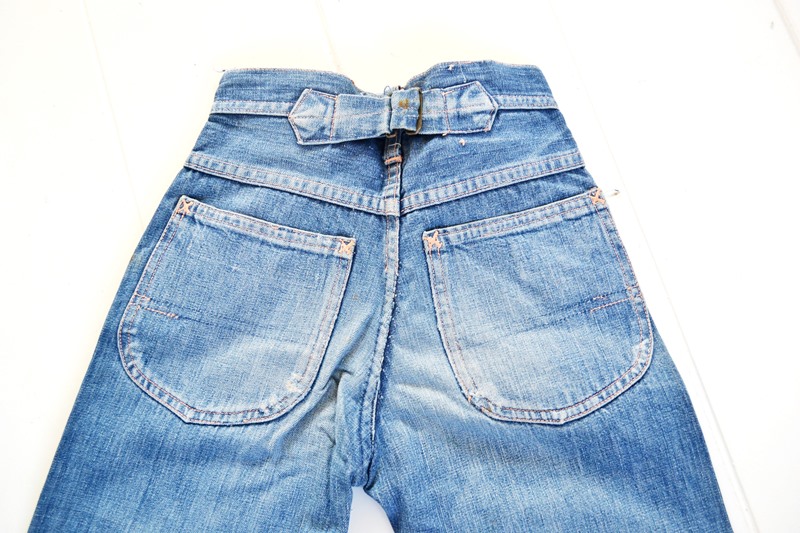 Next to the five belt loops the jeans has a cinchback on the back to fasten it. 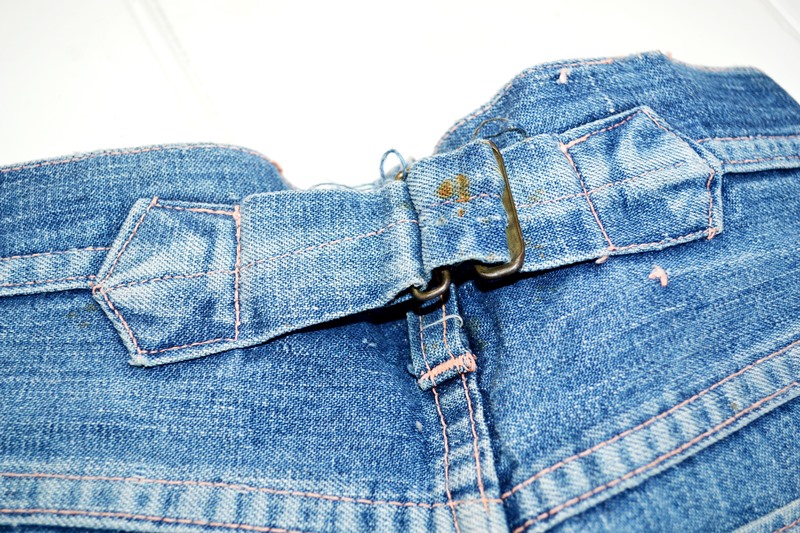 The waistband label isn’t there anymore unfortunately. It’s a pity as it was a hair-on-hide patch which Lee Jeans introduced in 1936. This was Lee’s first leather label. The brand logo was branded directly onto the cowhide as a link to the cowboy lifestyle. 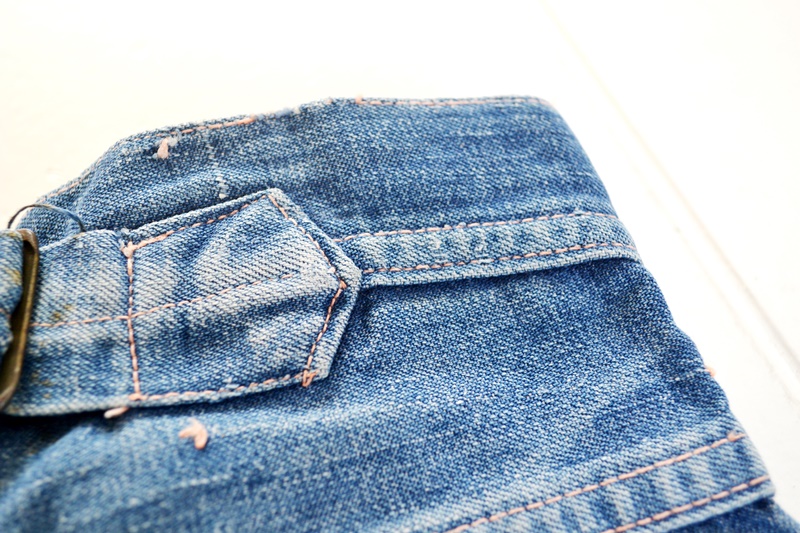 The back pockets has the legendary Lee pocket shape. A more round shape that last longer while cowboys were riding their horse. 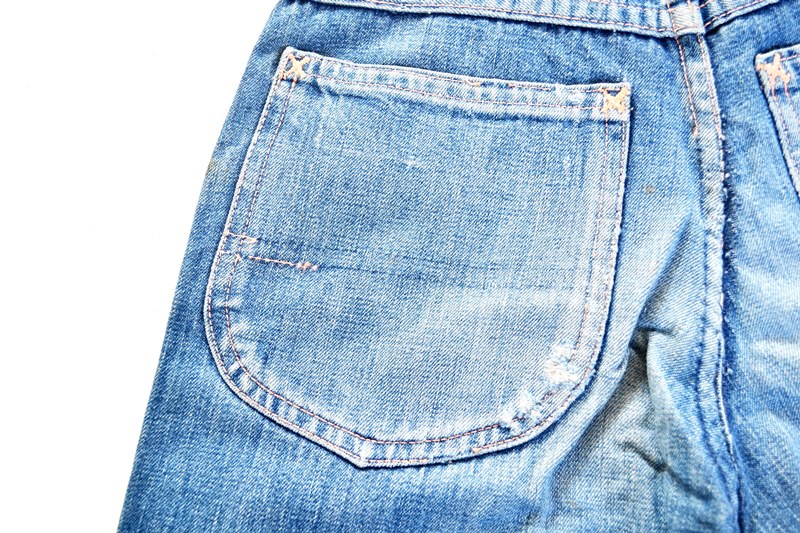 The pocket stitching shows a double ‘flat line’. This was before Lee introduced their Lazy S, stitches that resemble the long horns during the early fourties. This pair is also produced in the past with Levi’s arcuates. Levi’s protected their aruates stitching in 1943 with a registration as a lot of competitors used their arcuates. Until 1943 a lot of denim garments were produced with these Levi’s arcuates on their backpockets. 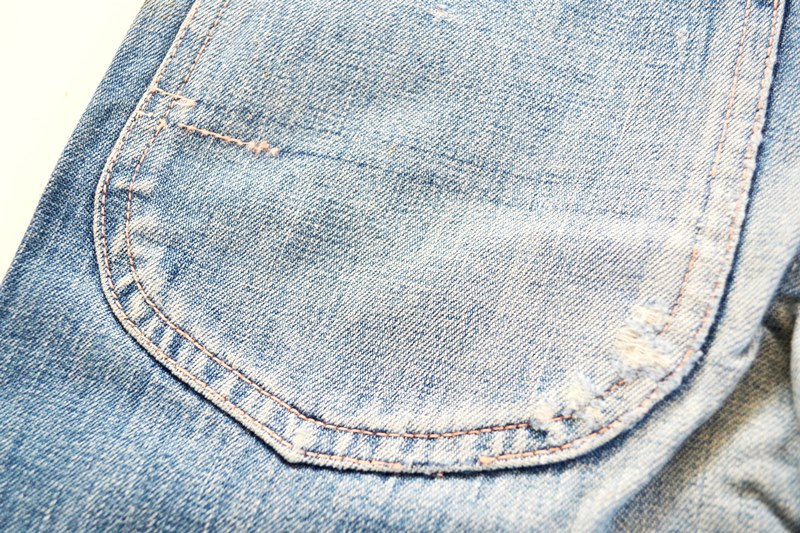 When you look closely you will see the marks on the left backpocket where the Penburn patch used to be (at the top of the pocket). A Penburn patch was a leather patch that was attach so people could burn their own name, nickname, wranchname or whatever on it. You could go to your local Lee dealer who had a brander to get it done. 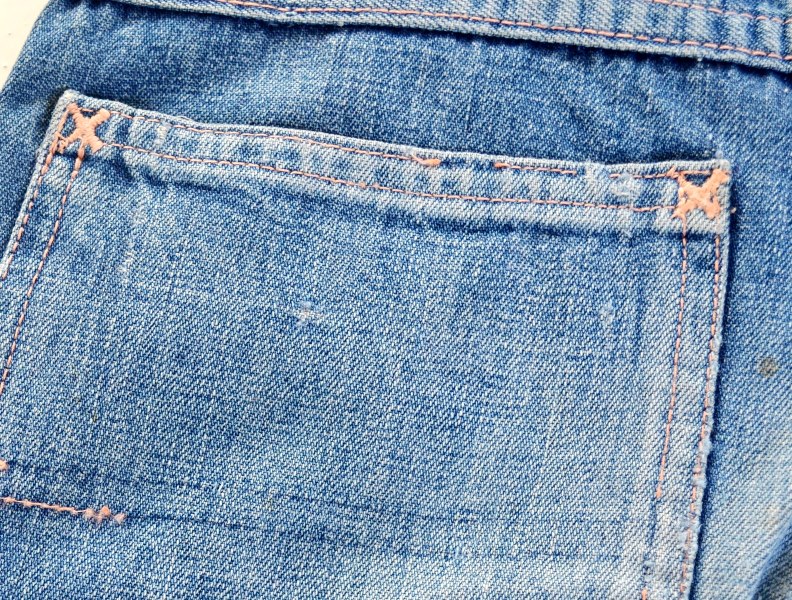 Vintage Penburn card with the instructions how it works. The backpockets are reinforced with X bartacks for extra strength. They didn’t used rivets on it as these would scratch the leather horse saddles. 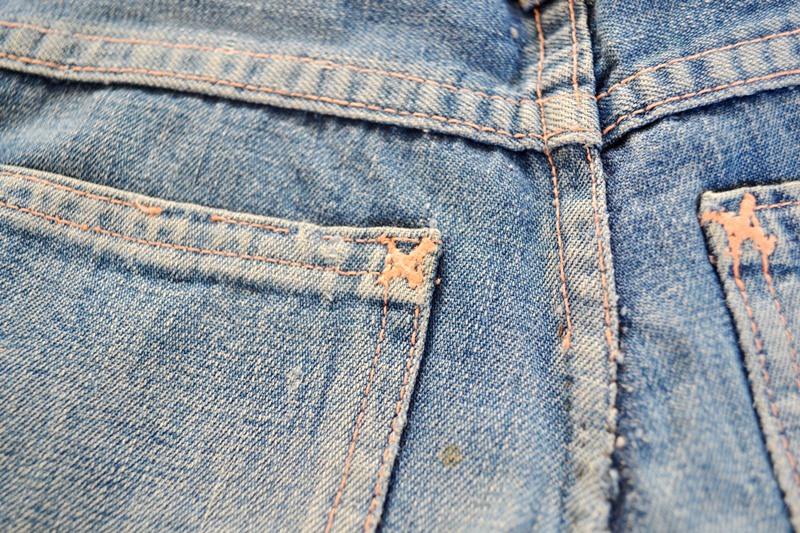 Inside the right backpocket there’s a washed out Amalgamated Garment Workers of America Tag. 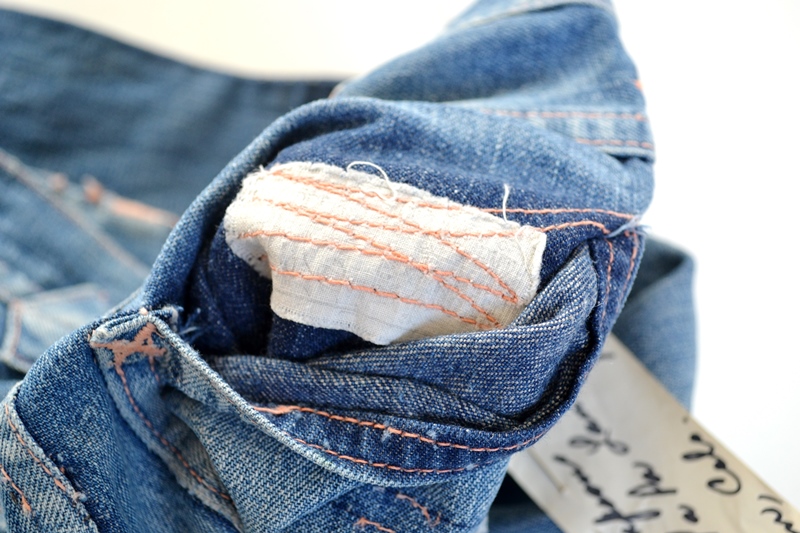 Read also about the history of Lee Cowboys jeans here and about the Riders jacket here.