This vintage Lee Rider jacket is part of my denim archive and dates back to the 1970s, or early 1980s. Lee introduced the Rider jacket in 1931 as the first shorter tailored western style jacket for cowboys. It became an instant hit after they came onto the market. Nowadays it’s a true classic and still one of the cornerstones of the American denim brand. 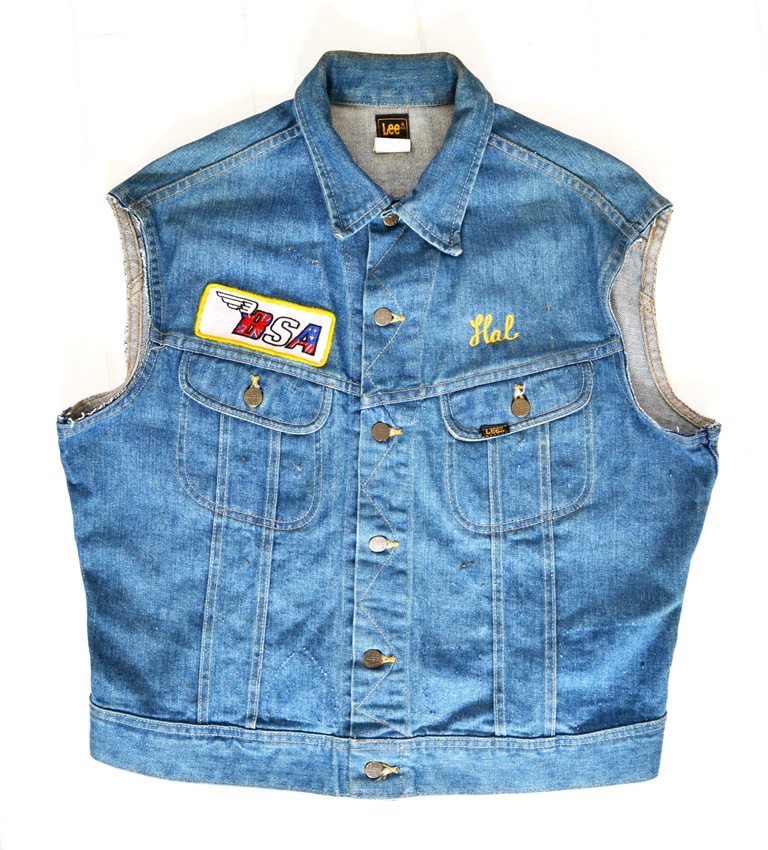 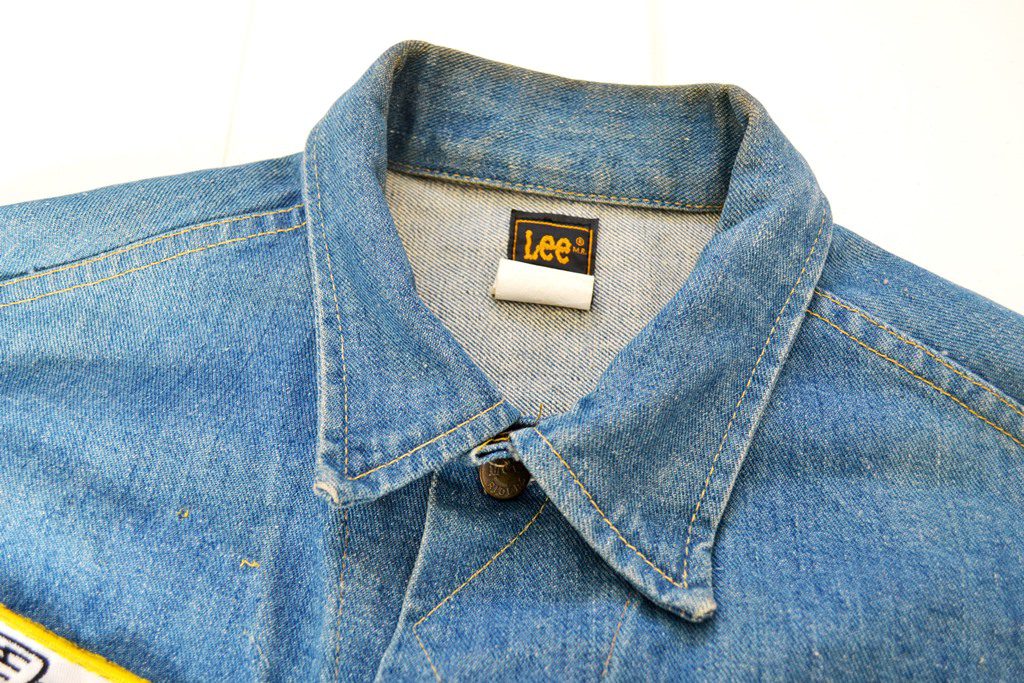 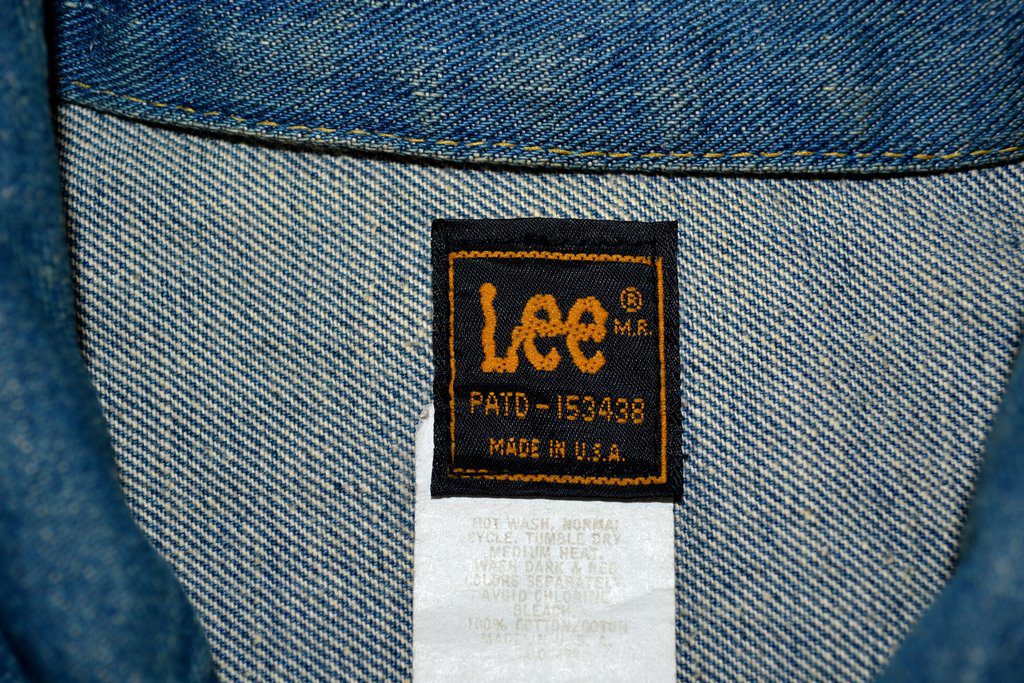 This vintage jacket is also known as the ‘third’ edition of the Rider jacket as the chest pocket have a label with R + MR on it. The ‘first‘ editions have a plain label (see first edition here) and the ‘seconds‘ from the 1960s only the R (see a 1960s version here). The R + MR were produced in the 1970s and later. One of the breast pockets has the Amalgamated Garment Workers of America tag. 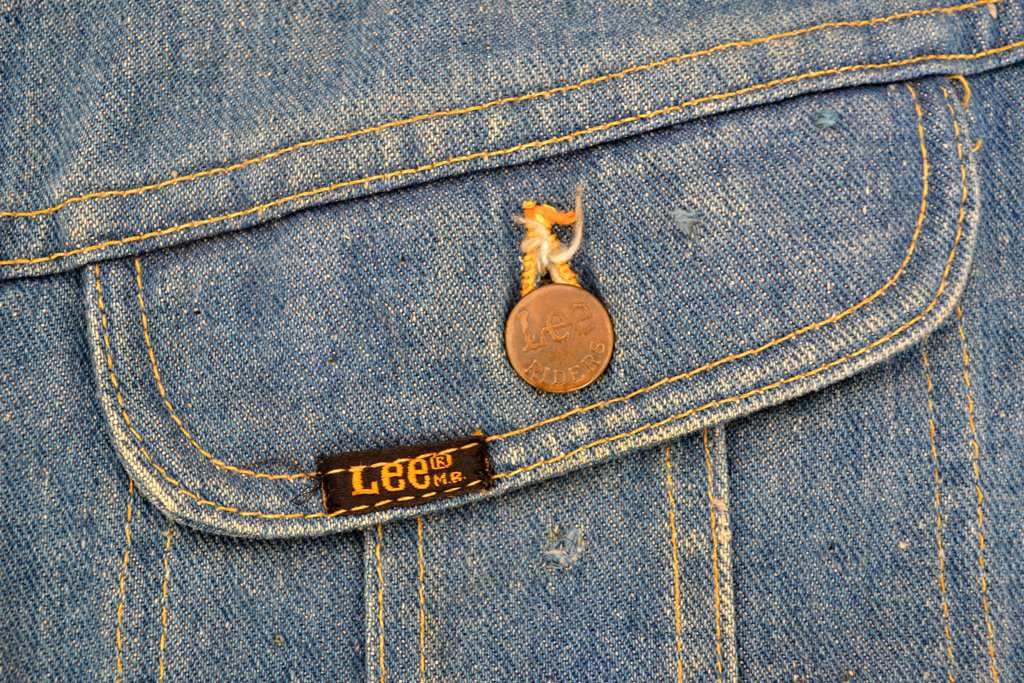 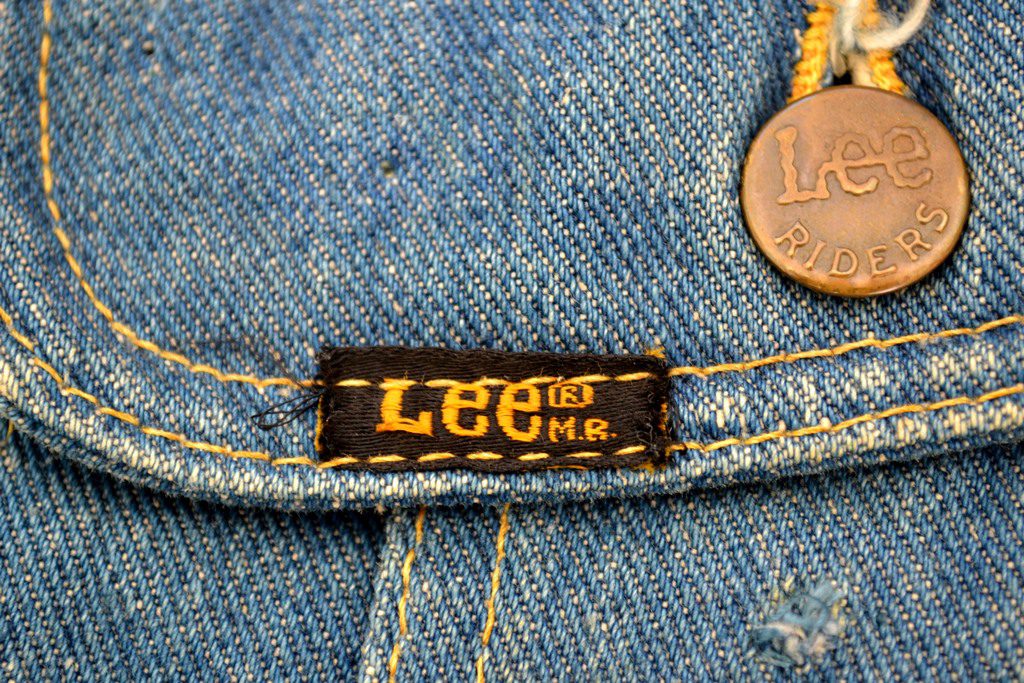 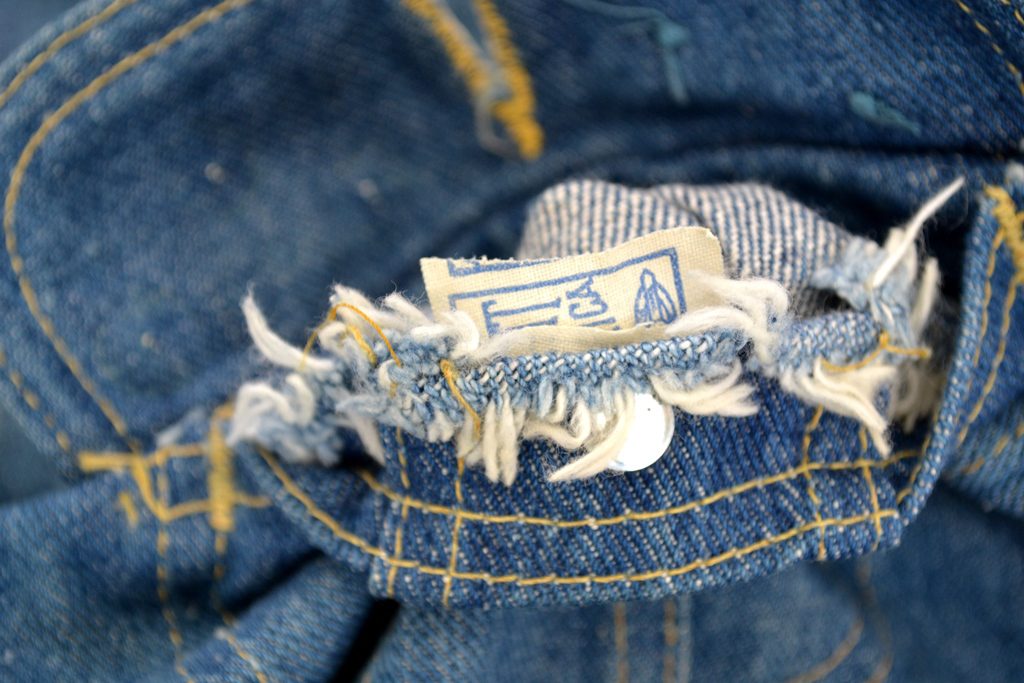 The jacket is a sleeveless biker jacket, also known as the denim cut or vest, because bikers cut-off the sleeves (and sometimes also the collar), so they could wear them easily over their clothes. When bikers were making long-distance trips during cold weather riding, as in winter with freezing temps, you know that wearing layers is necessary for keeping warm. When you wear  many layers, it’s very difficult to bend your elbows, so that’s why they cut off the sleeves. That’s how the denim cut-offs were born. (Read more background info about denim cut-offs here). 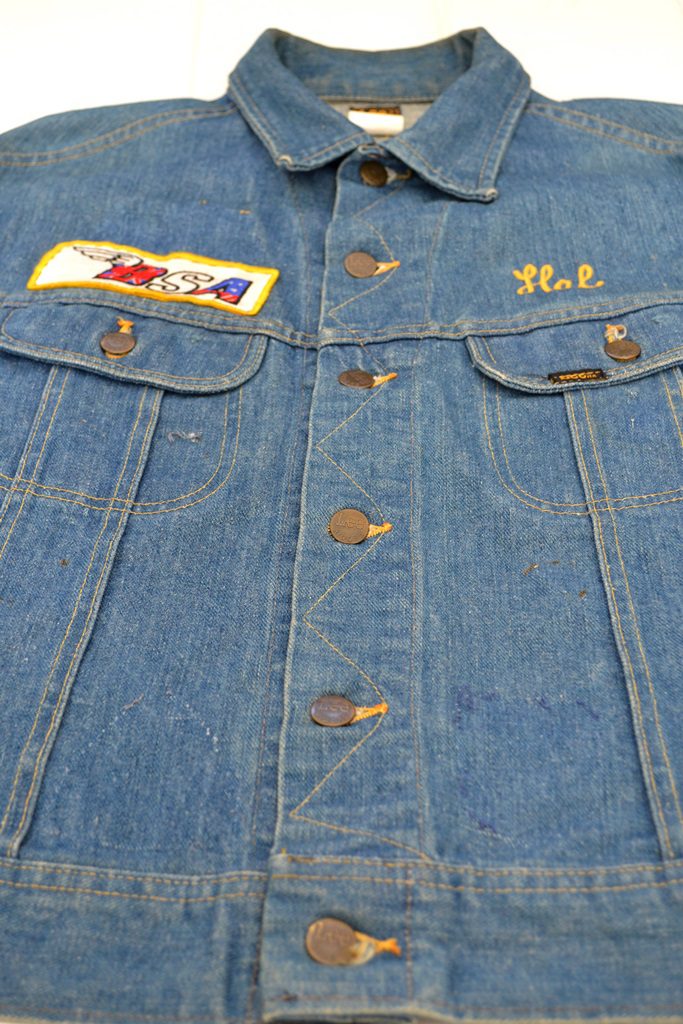 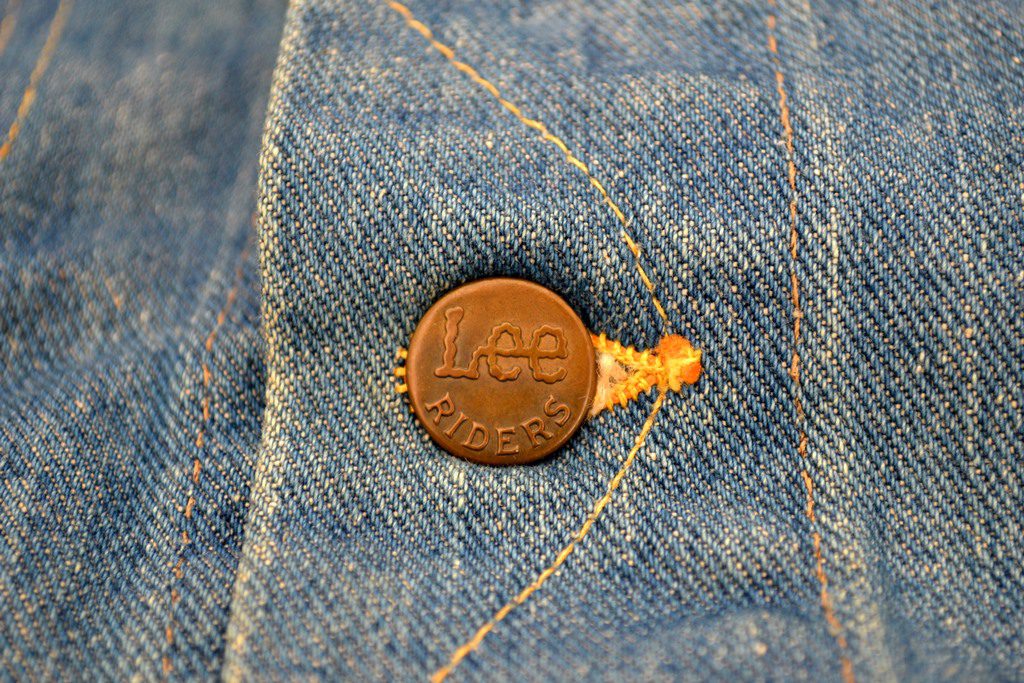 On the front on this highlighted vintage Lee biker jacket you see a BSA (Birmingham Small Arms Company Limited) motorcycle patch. The BSA motorcycle brand was founded in 1919. From the mid-1930s through the early 1960s, the British company was the world’s largest producer of motorcycles. 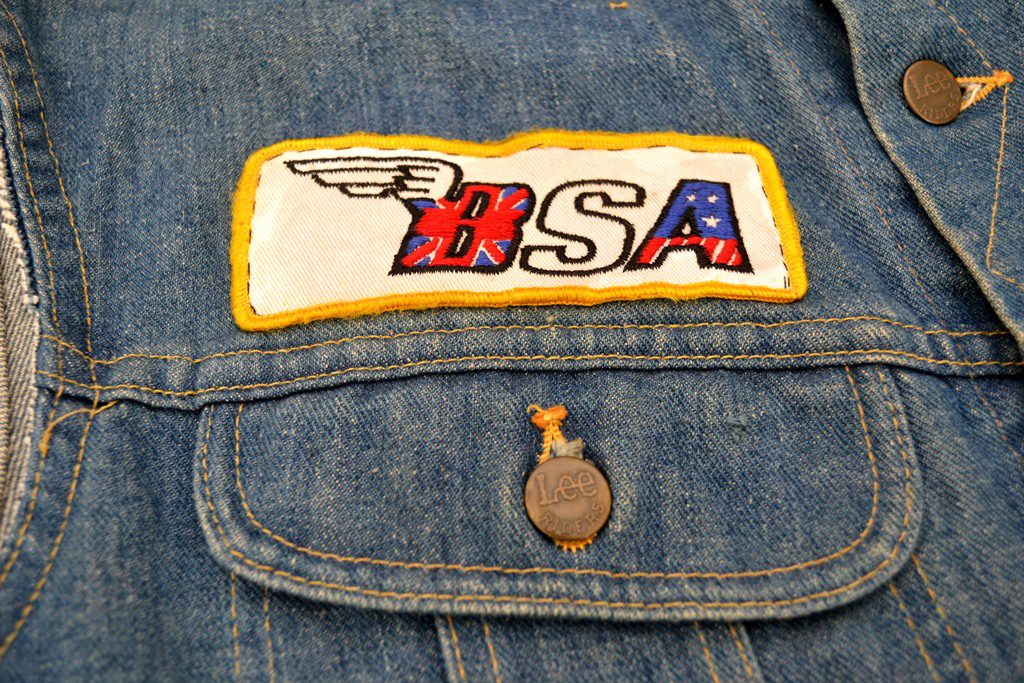 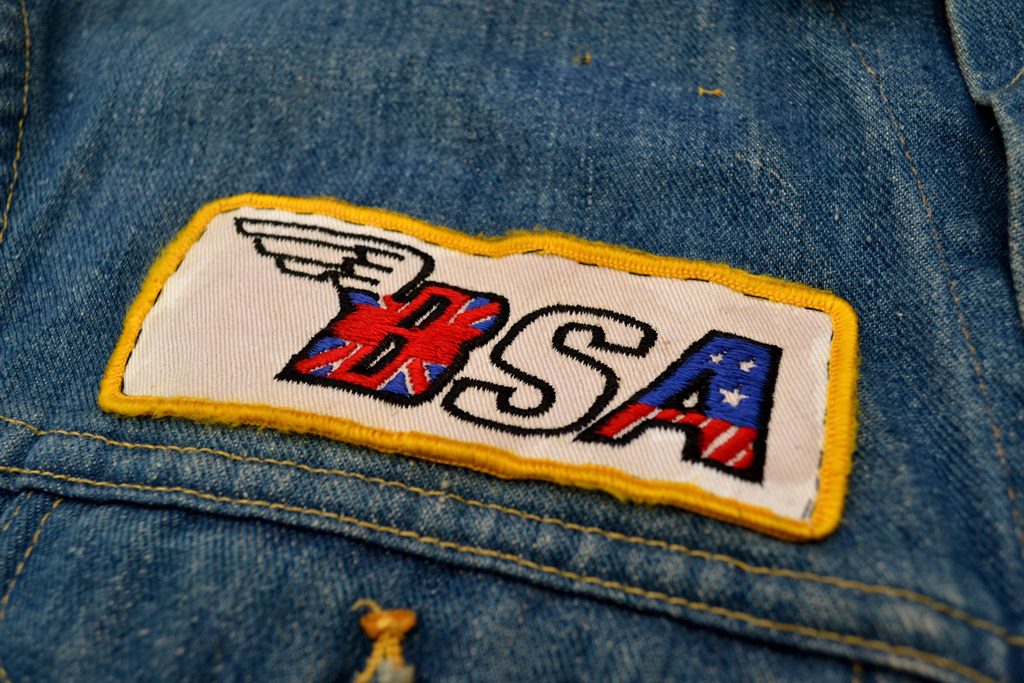 It seems that the last owner of this jacket was a biker named Hal, as you can see his name embroidered on the front, and added also the MC embroidery on the back in the same yarn color. But before he turned this jacket into an MC club vest, it was in hands of the Lazy H.A. Ranch in Sedona. 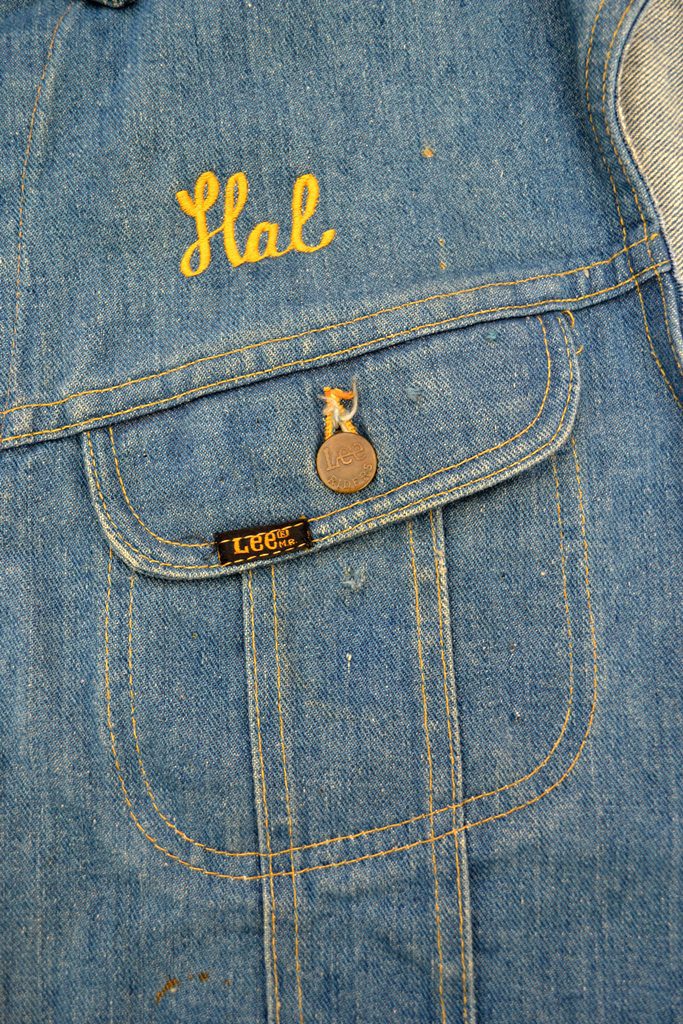 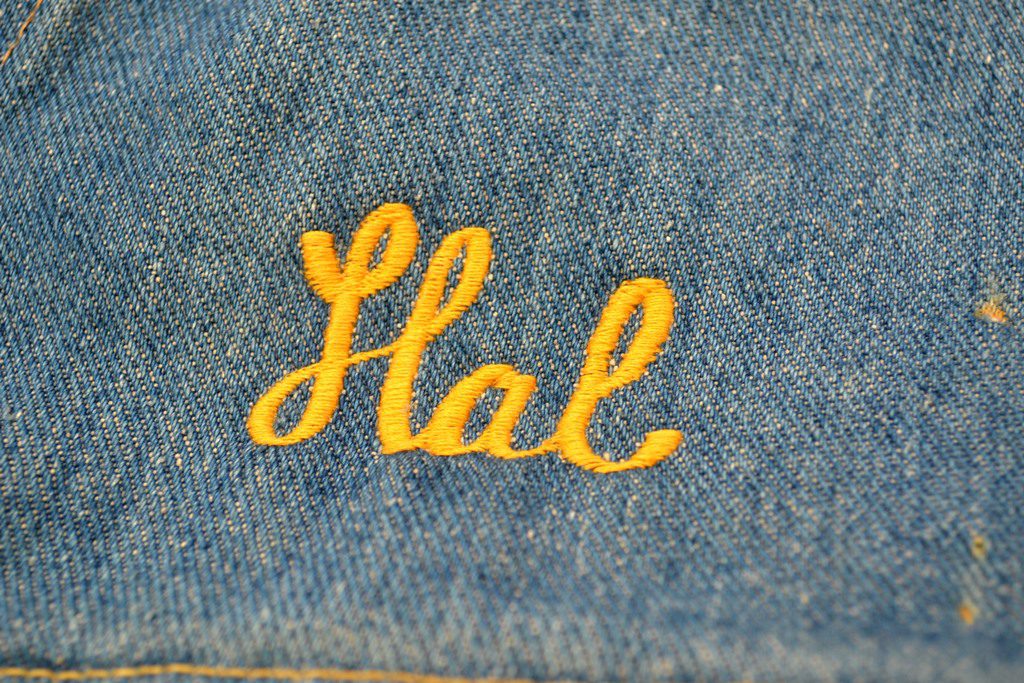 Sedona is a city in the US state of Arizona and falls administratively under Coconino County and Yavapai County. Sedona was initially no more than a farming village, so also with a lot of horse riding ranches. From the 1950s and 1960s, more and more artists settled in Sedona. In the 1980s, Sedona became an important center for new age supporters and people interested in spirituality. 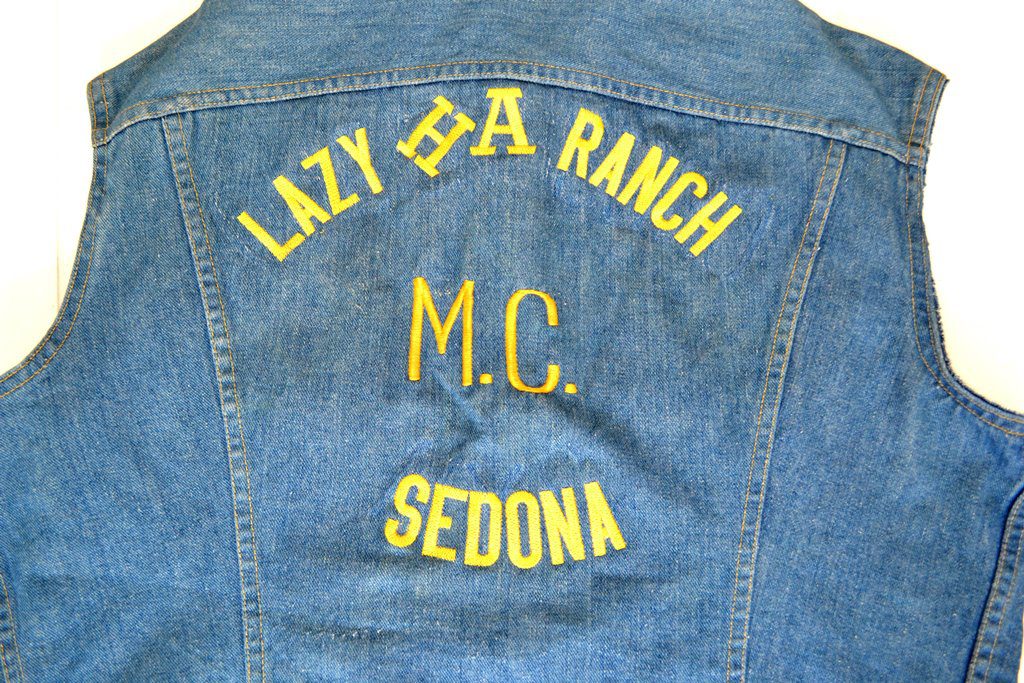 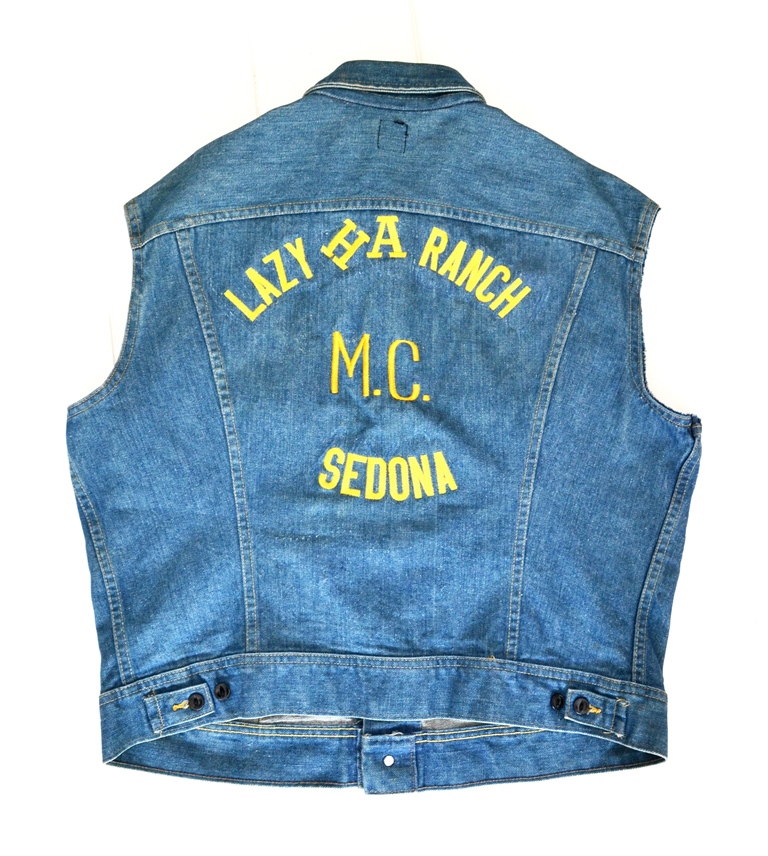 On the front, and the back of the jacket, were more patches added, but were removed as you still can see the holes of the sewing machine if you look closely. Maybe the biker removed these and added his name, BSA patch, and MC embroidery on the jacket. It seems that the jacket was first worn by someone who was riding a horse and then by someone riding a bike. Both with the mindset to be free and looking for adventure. We will never know the exact story of this vintage Lee jacket, but one thing is sure, it’s loaded with history, great memories, and stories. 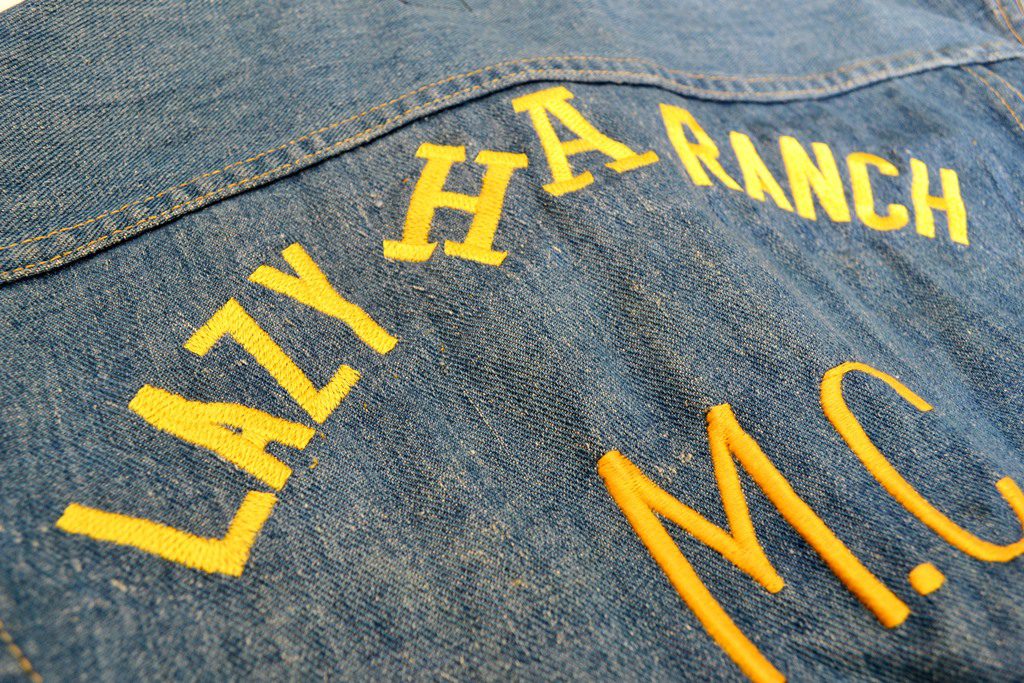 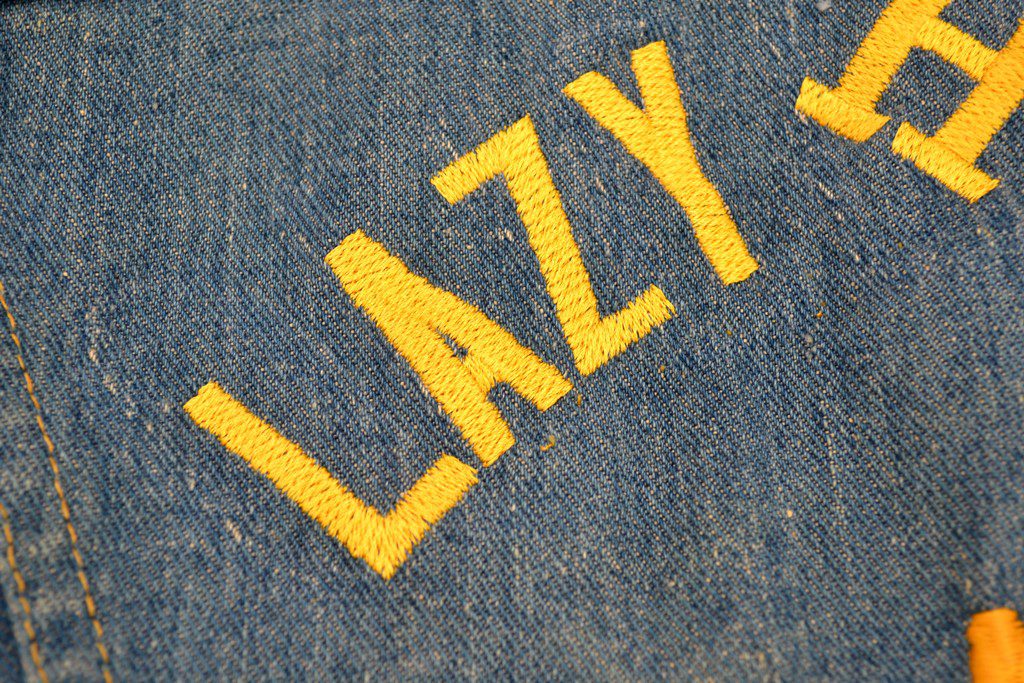 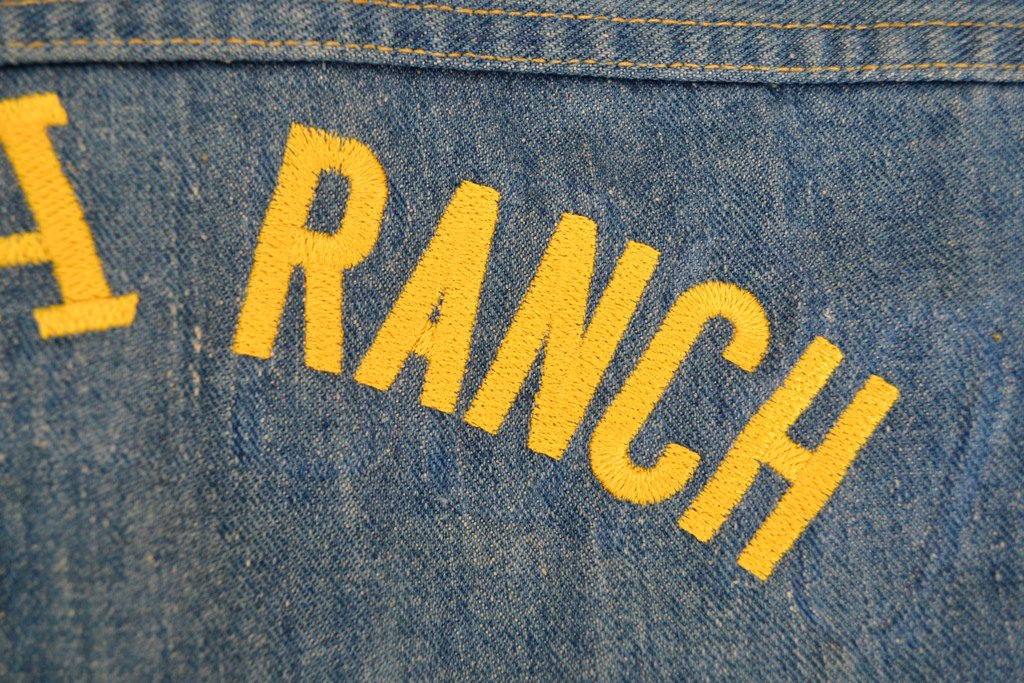 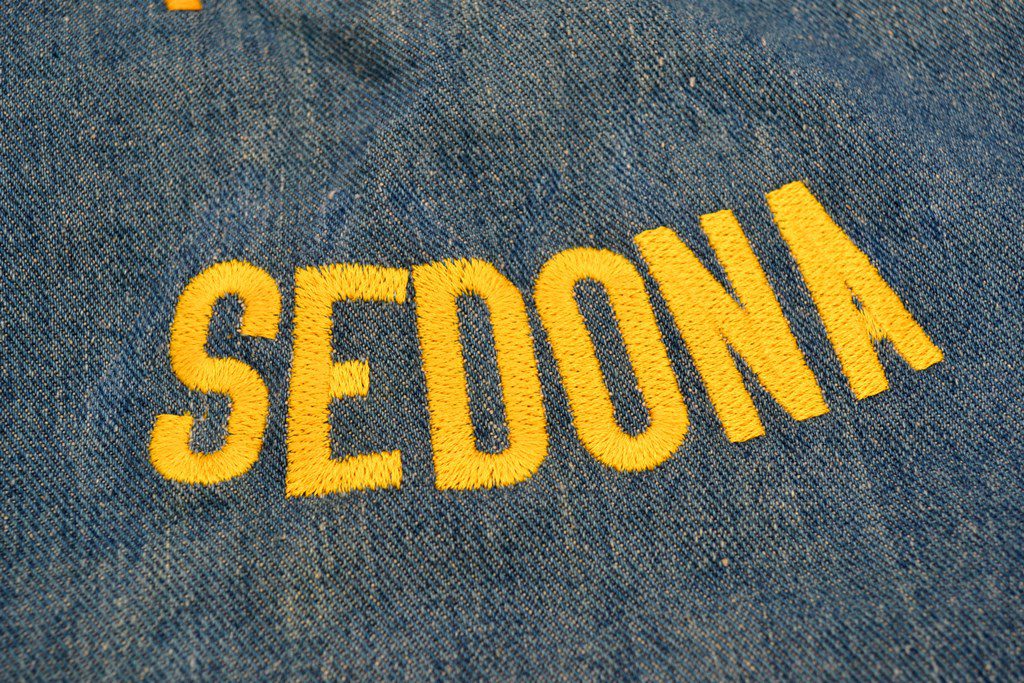 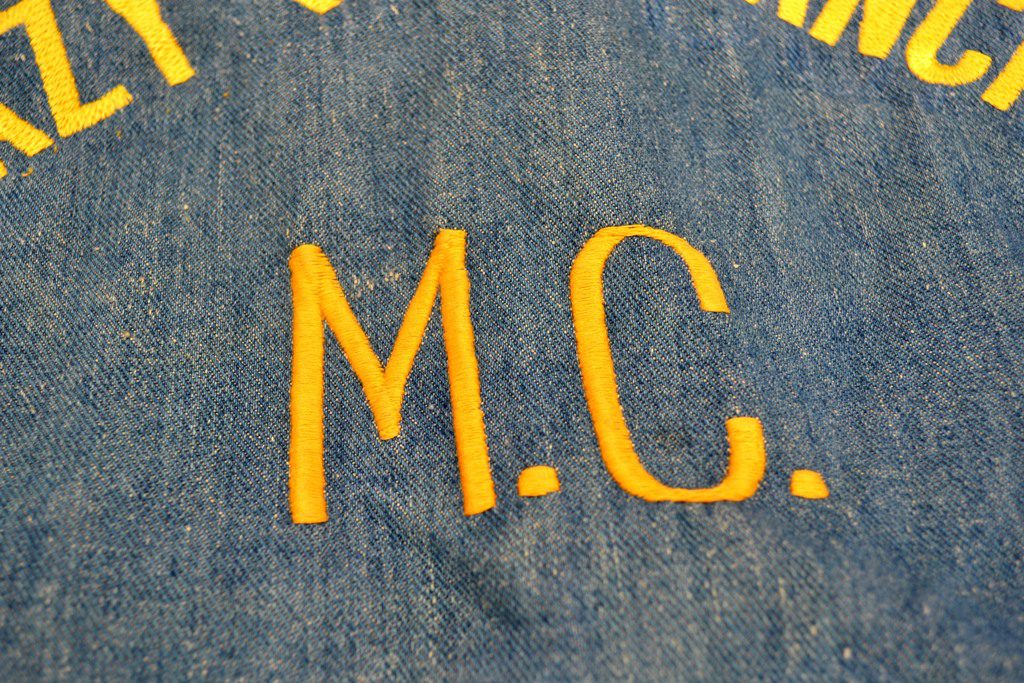 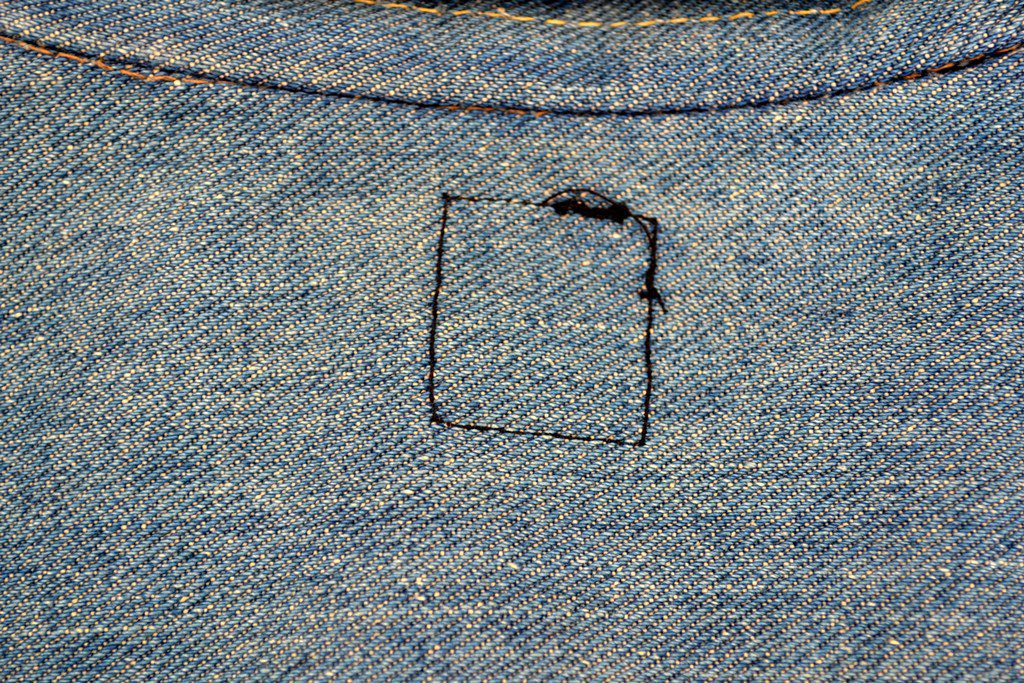 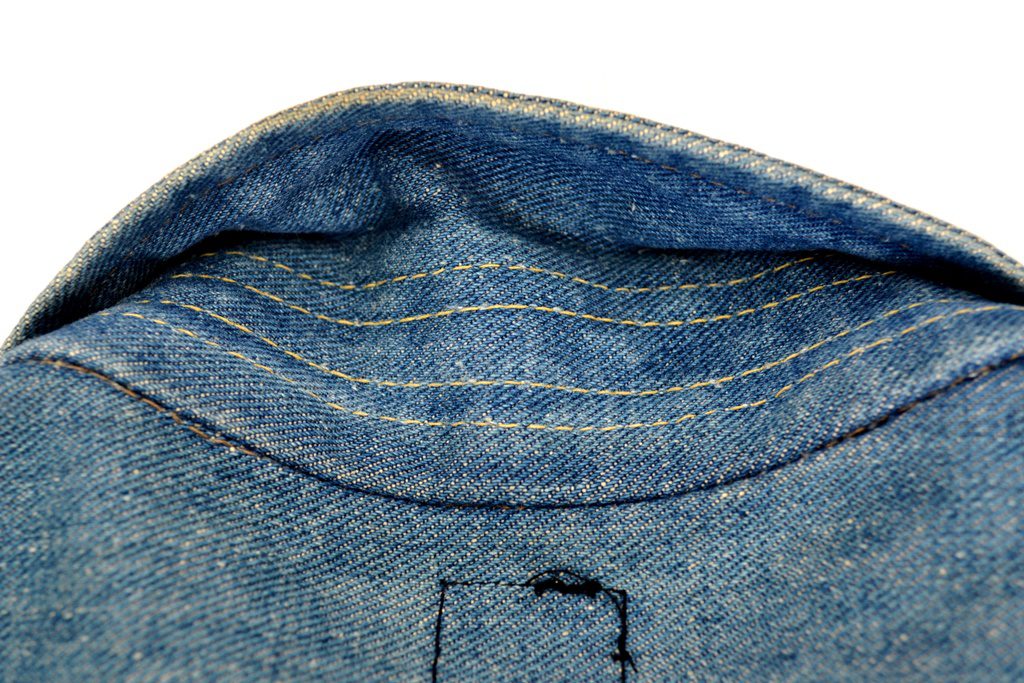 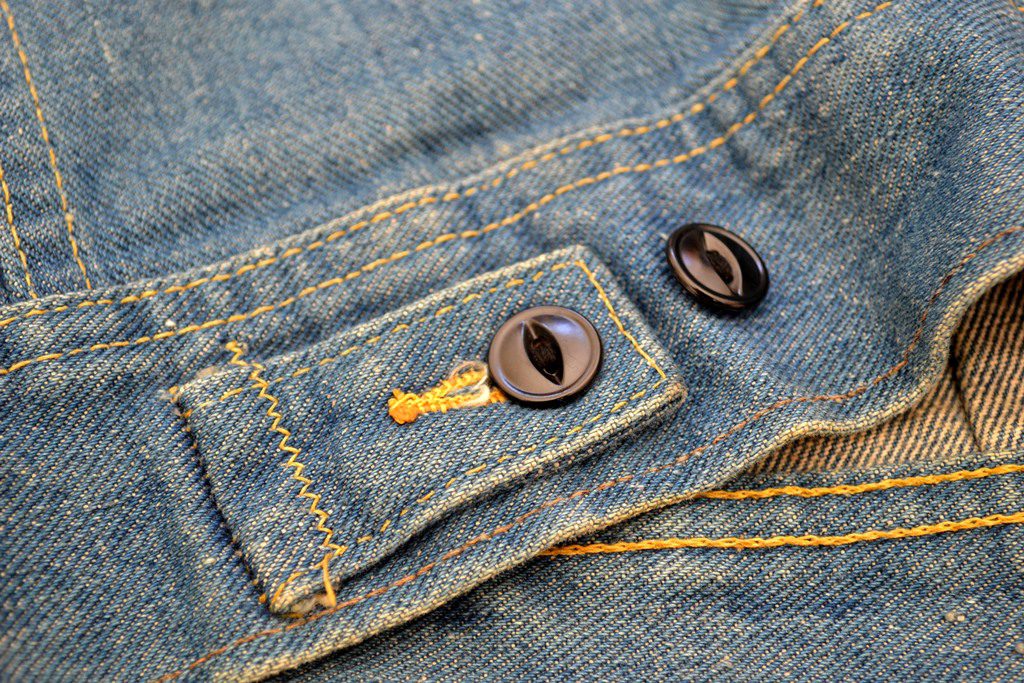 Butts And Shoulders On Tour