Casey Duane Tibbs was an American cowboy, rodeo performer, and actor. He was born in Orton northwest of Fort Pierre in Stanley County in central South Dakota on the 5th of March, 1929, and passed away on the 28th of January, 1990. He’s a nine-time world champion cowboy who left home at the age of 13 in 1942 due to his father’s disdain of rodeo. Over a decade of dominance followed as he brought national attention to rodeo as the original American sport. Akin to riding a wild bronc in competition, his unpredictable life had its grand victories and cheerless crashes. In 1979, he was inducted into the Pro Rodeo Hall of Fame. 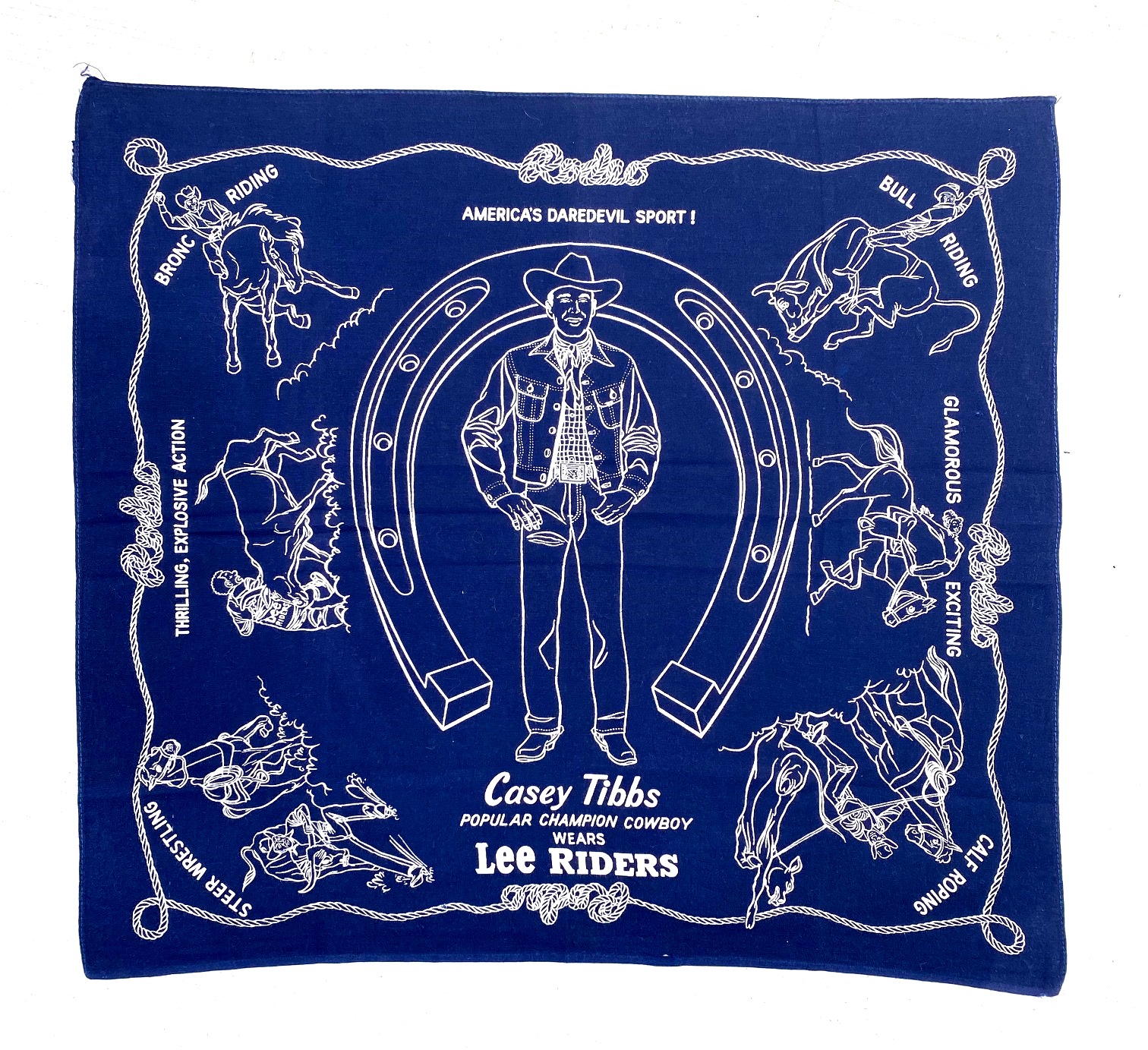 The Rodeo Titles Of Casey Tibbs

After battling bone cancer and then lung cancer for about a year, he died at his home in Ramona, while watching the 1990 Super Bowl. He is interred at the Scotty Philip Cemetery in Fort Pierre, South Dakota. 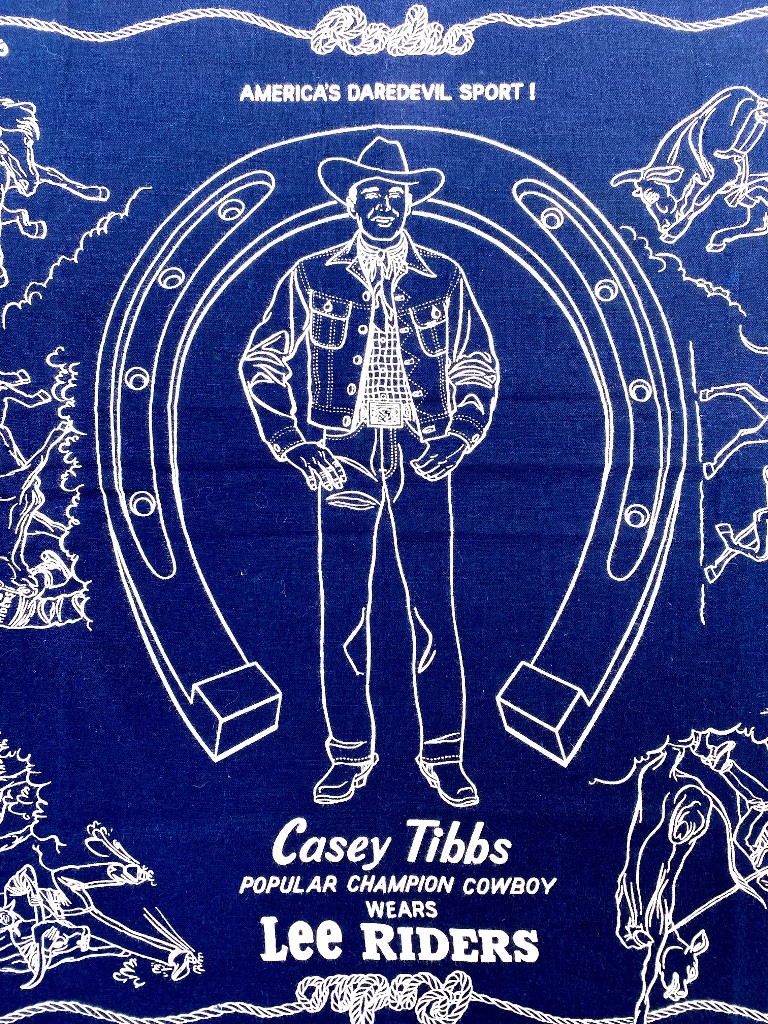 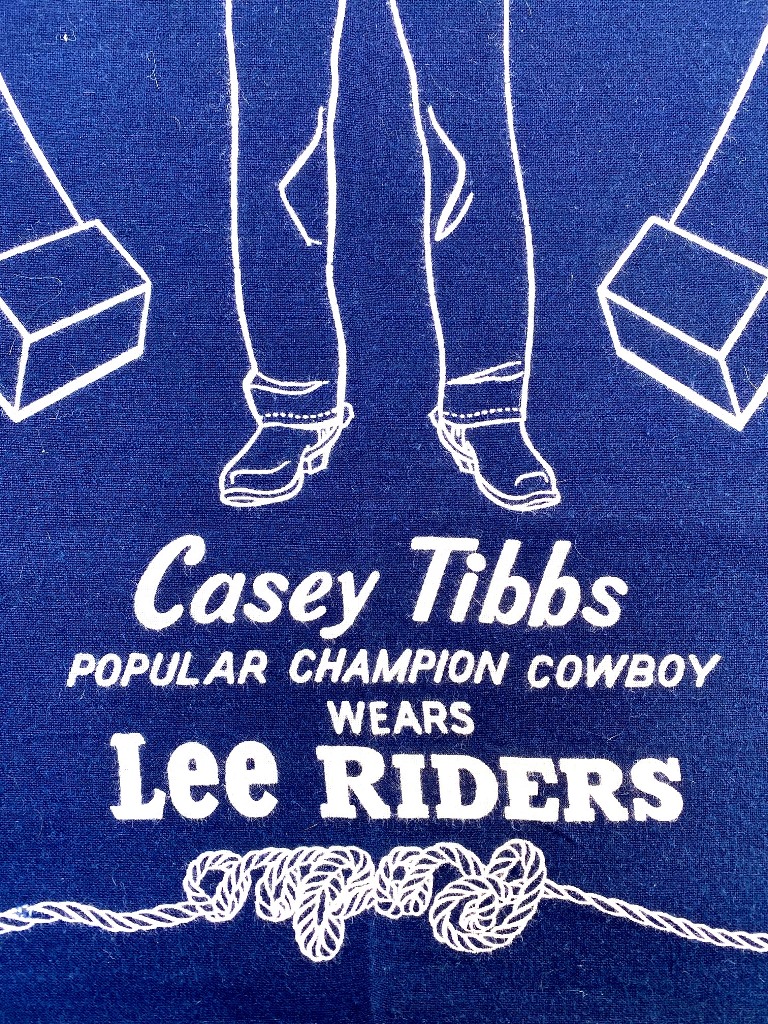 Lee Jeans used Casey Tibbs as Lee’s western spokesmodel in the 1950s. He appeared in ads for the 101 Lee Rider cowboy pants, the 101-J Lee Rider Jacket, and Lee Westerners. He made also appearances for the brand across the country.

As a spokesmodel for the brand, they used him on promotional bandanas, like on this original 1950s version. This one is blue, but is was also made in red. The vintage bandana was found in America not so long ago when they cleaned a house that went for sale when the residents died. After all those years it’s in a mint condition, so almost new. The design of the bandana shows Casey Tibbs proudly standing in front of a horseshoe with the text ‘Rodeo, America’s Daredevil Sport!’. He’s wearing a Lee outfit, and especially the iconic details as the zig-zag stitching, chest pockets, and stitching of the 101-J Lee Rider Jacket can be seen very clearly. Around him there’re graphics of different elements of those rodeo events as bull riding, bronc riding, calf roping, glamorous exciting, steer wrestling, and thrilling explosive action. In the last graphic, you can see a detailed rodeo clown wearing the oversized Lee Riders rodeo pants.

Rodeo clowns were playing a critical role in those rodeos events. They entertain the crowds during breaks but also distracted a bull or horse from fallen riders so that the injured could exit the ring. This gave them a chance to get to safety. 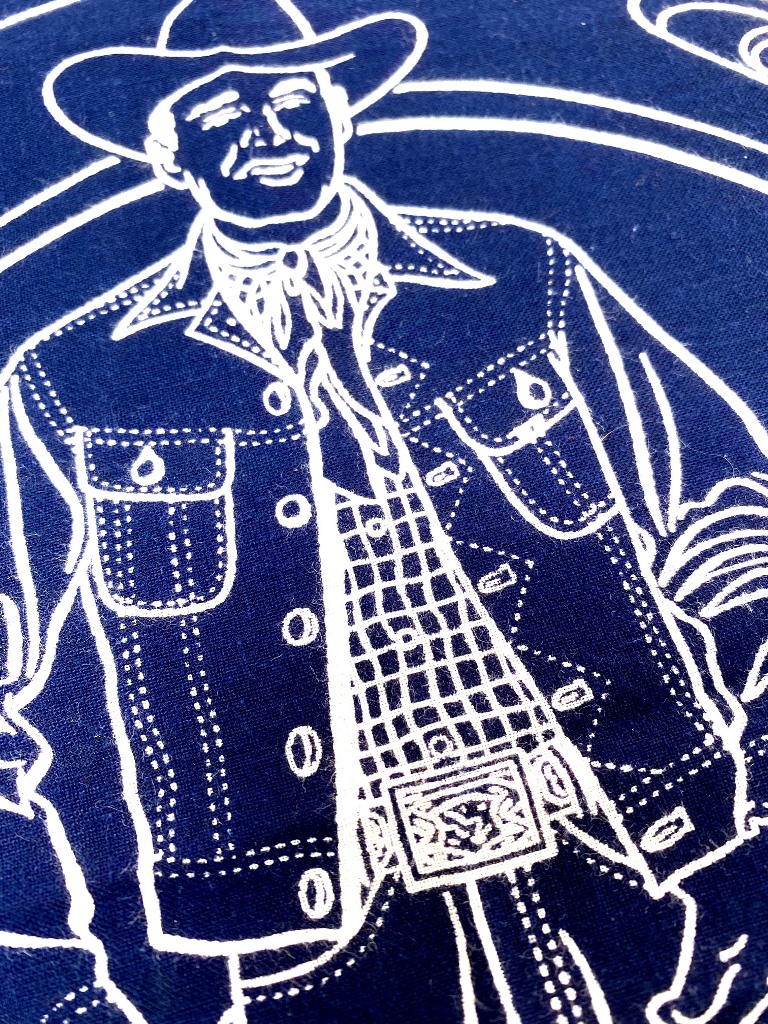 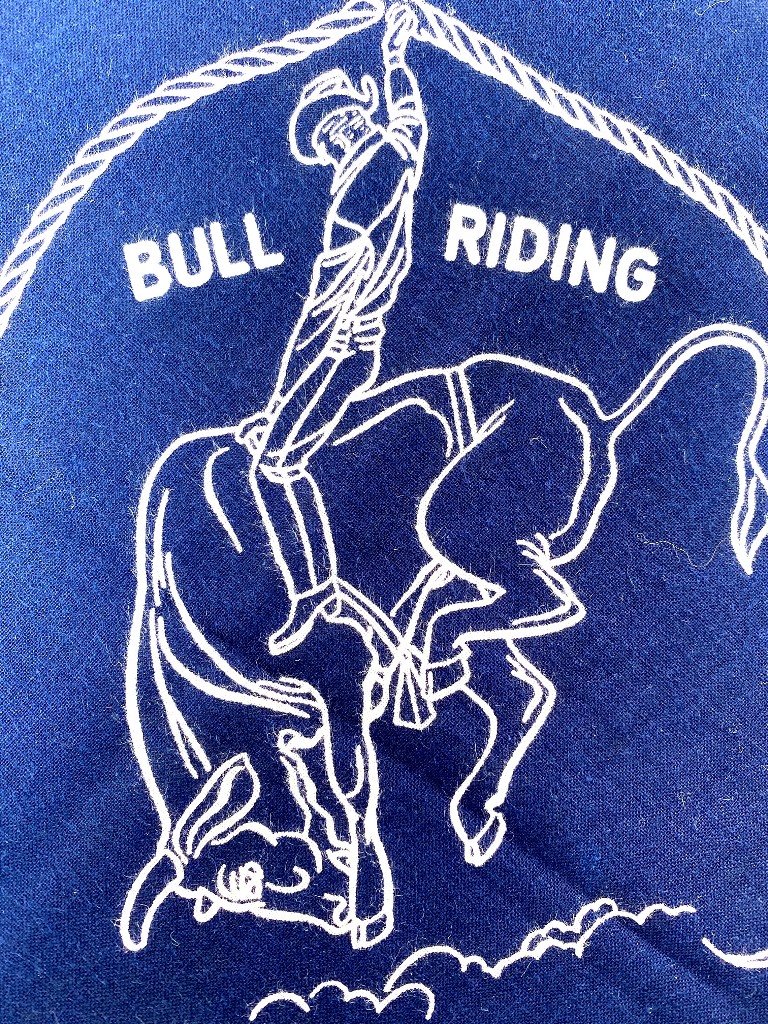 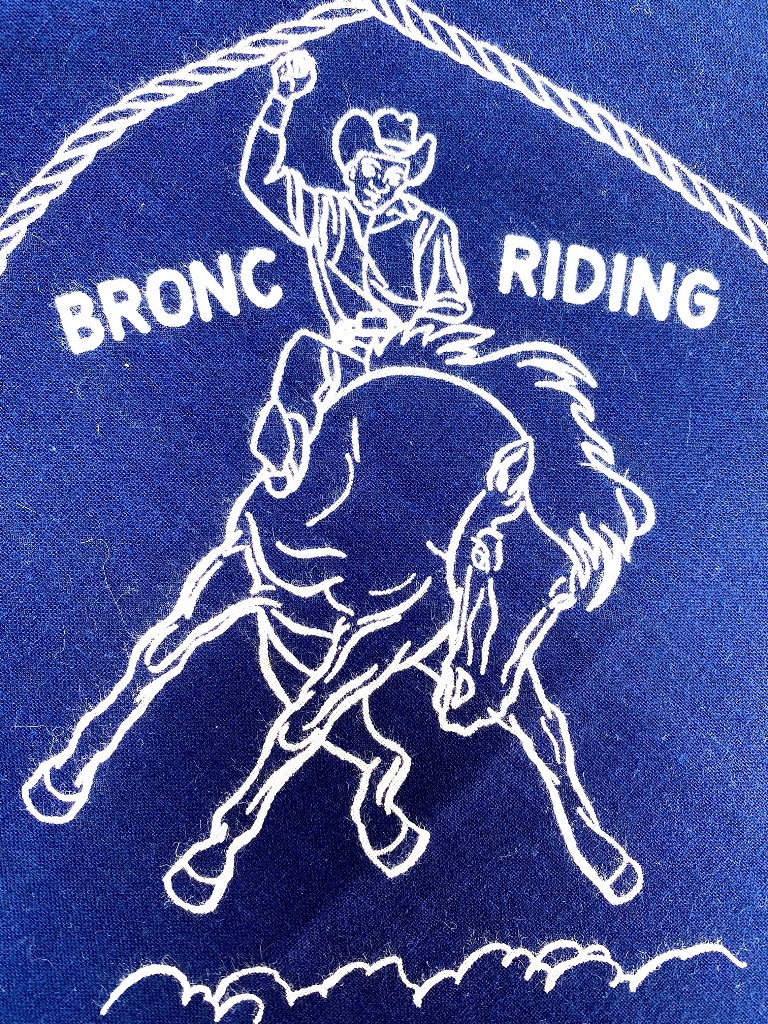 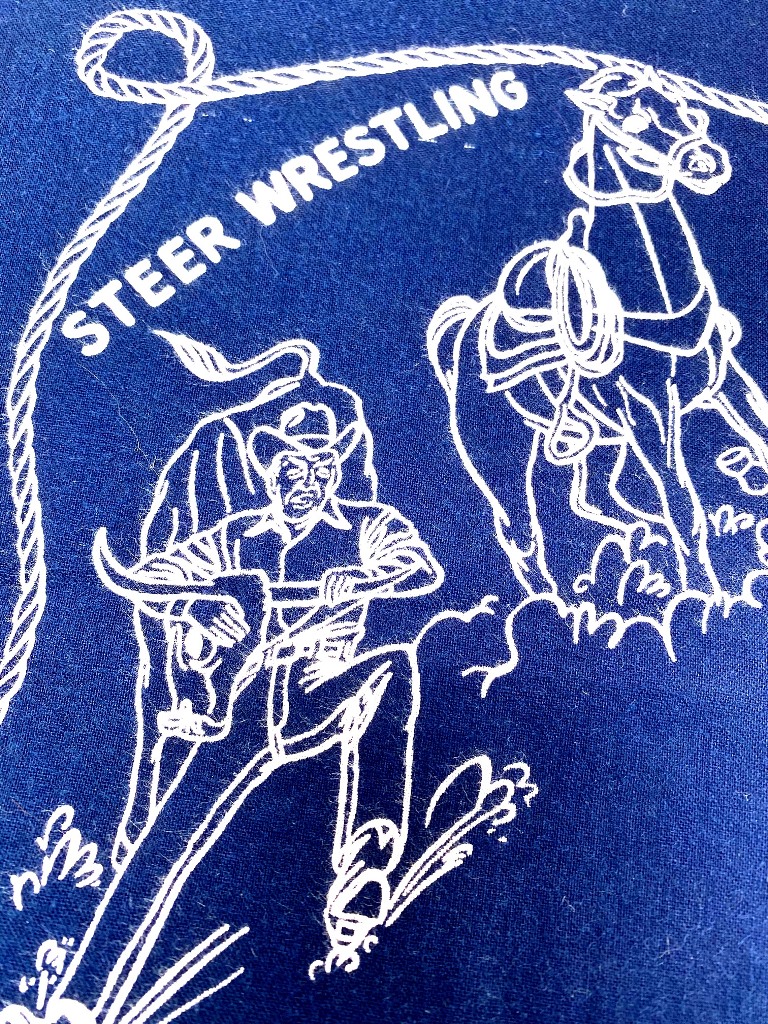 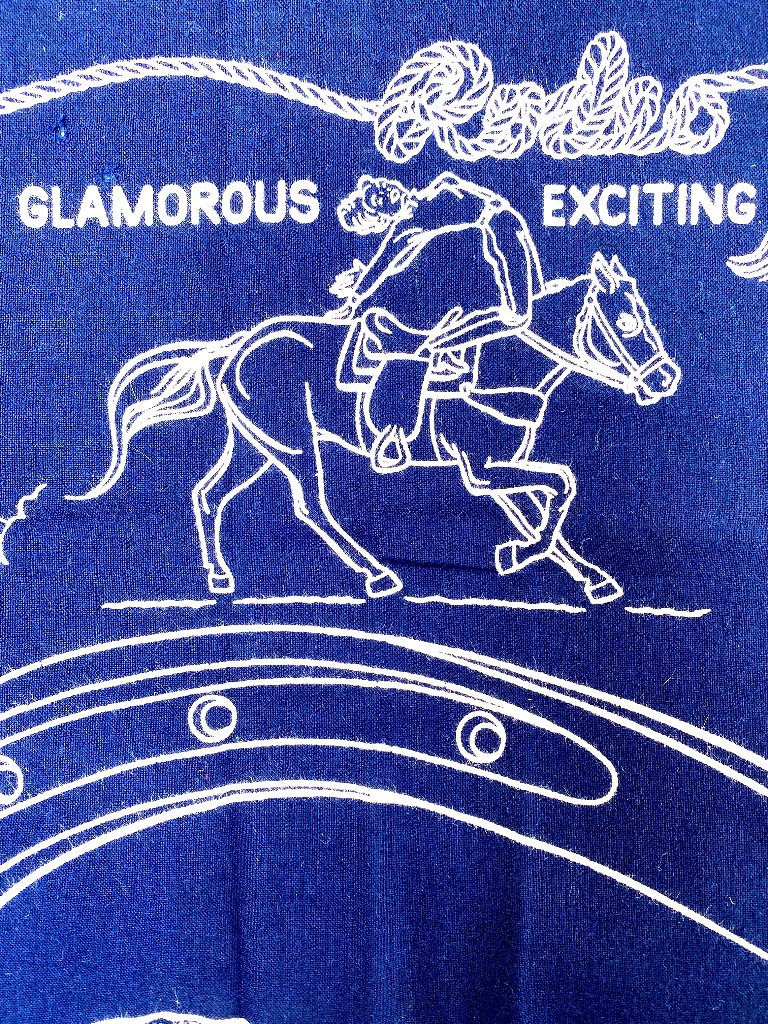 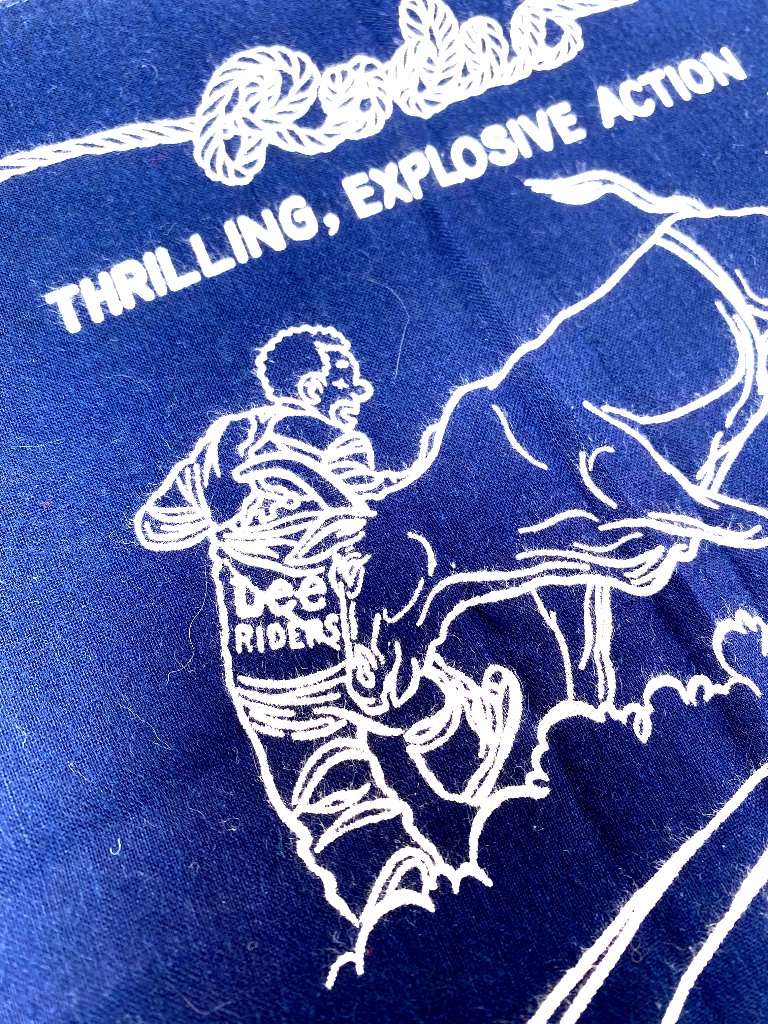 In 2019, Lee Jeans used another version of this original bandana as inspiration for a reproduction, and for a sweater that has an all-over print. It was part of their premium Lee 101 collection. More of the sweater can be seen here. 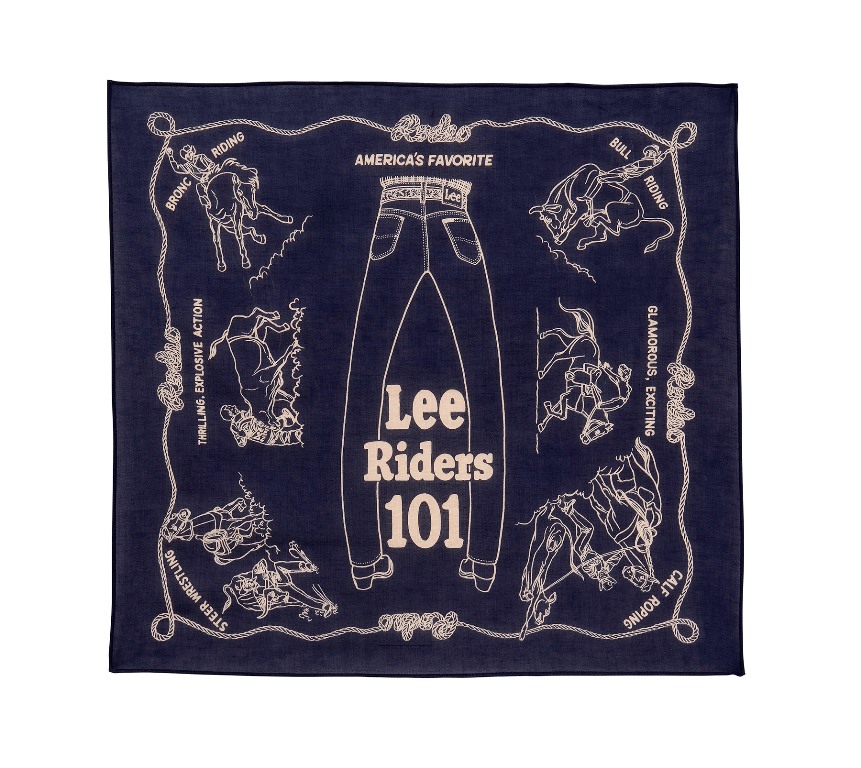 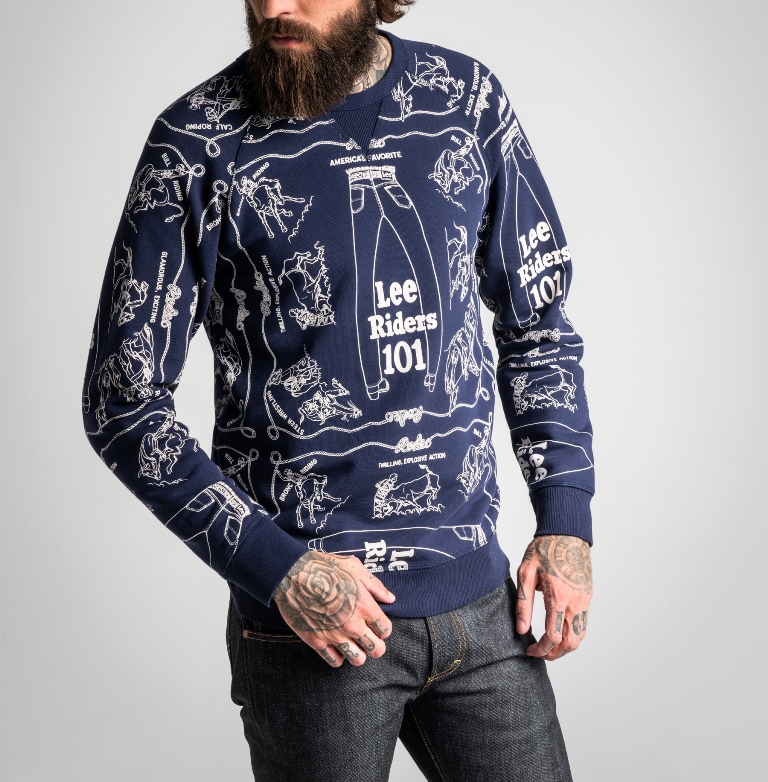 The Documentary About His Life

In 2017, Denver filmmaker Justin Koehler made the documentary Floating Horses: The Life Of Casey Tibbs. This 94-minute film tells the entire story of Casey Tibbs. It won the 2018 Western Heritage Award for best documentary film.

Watch the trailer of the documentary here;